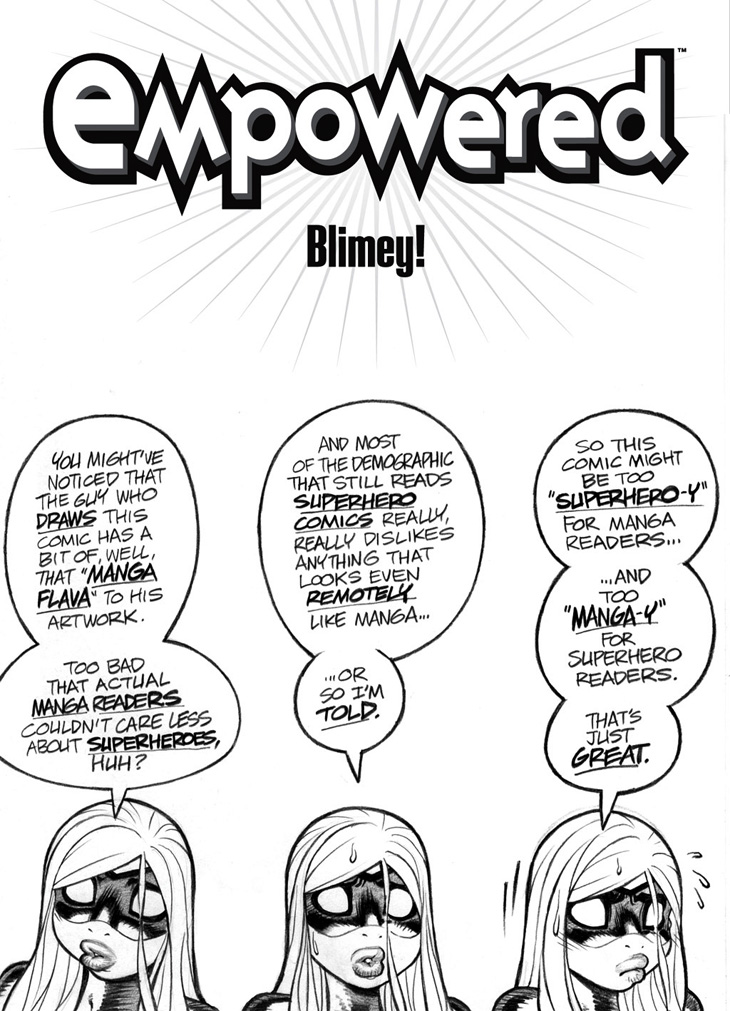 Welcome to my so-called career in (print) comics, folks! Or the tail end of it, at least, as Empowered represents my last, desperate, flailing attempt to cling to employment in a comics field with fewer and fewer opportunities for me. To paraphrase the great womb-and-seed line from the Coen brothers’ Raising Arizona, “The comics field was a barren place where my work could find no purchase.”

Undeniably, this series is a bit of an odd duck, as I have little doubt that the Venn-diagram overlap between readers of contemporary superhero comics and readers of manga probably doesn’t represent a breathtakingly huge subset. (Then again, perhaps I am mistaken, as this series has managed to sell over 150,000 books so far, which ain’t half bad for such a peculiar crossbreed of a franchise.) I myself am part of this overlap between readerships, given that the  older generation of manga readers I belong to grew up reading American titles long before encountering Japanese comics.

Ah, but adding to the “neither fish nor fowl” perception is the fact that Empowered has seen print primarily as a series of OGNs (Original Graphic Novels). This is an extreme oddity for an ongoing series that, at first, sold mainly in the “direct market” of comics retailers, as opposed to the “book market” of Amazon, Barnes & Noble and so on. The only other example of this unusual practice that springs to mind is Sophie Campbell’s fine series Wet Moon, likewise released as OGNs in the direct market by Oni Press. Fine (if rarefied) company, I say!

Amusingly enough, every time a new Empowered volume “drops,” the book ends up topping the direct-market sales chart for “Top-Selling Manga of the Month,” despite the problem that, technically speaking, the series isn’t actually “manga” as such. I would never complain about this arguable mischaracterization, however, as I’m always happy to see this offbeat little book at the top of any list, however it might have gotten there. Then again, my editor at Dark Horse Comics tells me that Stan Sakai’s great series Usagi Yojimbo often winds up on the Manga chart as well, so I’d say that we’re in fine company once again.