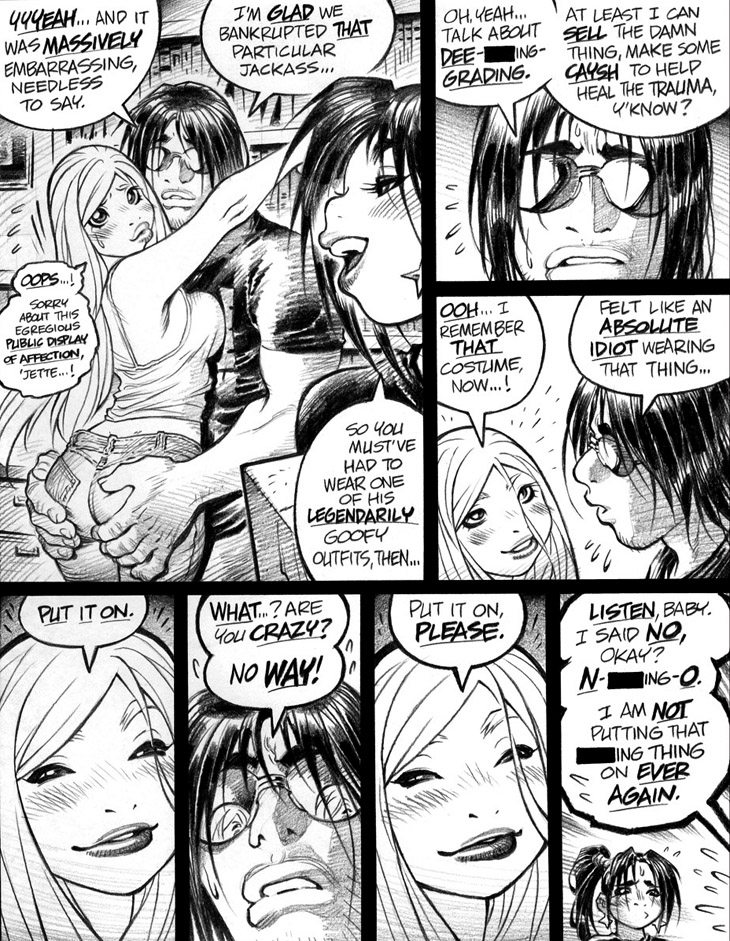 After finishing this story, I thought that the Public—well, at least semi-Public—Display of Affection with Emp and Thugboy seems a bit of a stretch, as it does seem to pop up outta nowhere to some degree. A few lines of flirtation on the previous page, then they’re immediately all over each other on this page? Not sure exactly why I went this route, here. As I’ve said before, the storytelling choices of 2005-Era Me—or, 2006-Era Me, by this point—are sometimes a mystery to Present-Day Me.

Must also admit that, yikes, Thugboy’s paws sure are gigantic as he grabs Emp’s jeans-clad behind. He’s typically depicted as notably taller and larger than Emp, but this scaling tendency does become even more magnified from time to time, as seen here. Oops! I do occasionally wish that I hadn’t decided to draw him quite as towering and massive in relation to Emp as I did. Might’ve been interesting if he were actually the same height as our heroine, rather than looming over her at times like one of the sporadically ginormous villains faced by Kenshiro in Fist of the Northstar. (Younger readers will, I hope, forgive me an older-guy reference to late-80s manga and anime.)

Then again, I should point out that I’m not at all sure exactly how much taller Thugboy is than Emp, as I’ve never even done a height comparison chart for the main cast of Empowered—and that’s something I’ve done for almost every other major project I’ve worked on. Presumably, I perceived niceties such as a diagram showing the relative heights of the characters to be yet another disposable artifact of the slow, cautious, time-consuming approach I formerly used in my comics work.