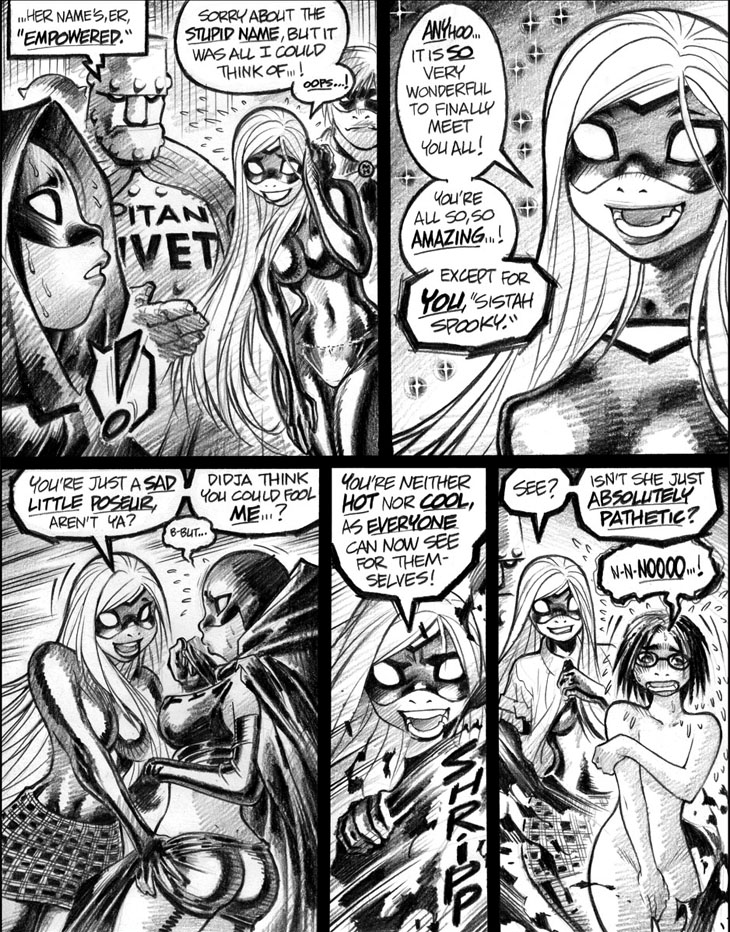 Art Critique Update: Belatedly noticed some odd art problems in panel 1—besides the curious shortness of Capitan Rivet, that is. Must say that I'm mystified by the puzzling fact that, on the left side, Emp's hair is way, waaaaaay too long, while on the right side, it's far too short. (An unspoken joke in the series is that Emp may well be trying to grow her hair long enough to potentially hide her behind from view, but as yet her golden mane hasn't even reached the small of her back—except in this shot, for some reason.) No idea what the heck 2006-Era Me was thinking; I'd assume this was just a randomly ultra-stylized artistic flourish on my part. Sometimes such reckless flourishes happen to work out well—but this, alas, is not one of those times.

Panel 1's Emp also features the oft-mentioned Mysteriously Intermittent Post-Millennial Torso Glitch, which I really do plan to address in detail at some point in the future. No, really; I'm still noodling away at a very long, elaborate, exhaustive "art tweet" discussion of the trend. Short version: The Torso Glitch was a puzzlingly random breakdown of my ability to "eyeball" a freehand figure drawing without properly constructing the figure first. Every now and then, for no apparent reason, I'd bungle a hastily sketched Emp image and oops, she would wind up wonkily wasp-waisted, as in this very panel. More on this matter later (he promised, albeit somewhat insincerely.)

Note, in panel 1, the detail that Emp is sporting underwear beneath her supersuit, in a direct callback to the very first Empowered story, “Not Very Secret,” in which Sistah Spooky berates her for extremely Visible Panty Lines. However, in the time since that initial story, I since developed the idea that this is far more than a mere aesthetic choice, that Emp’s unreliable and even recalcitrant “supersuit” will fail to provide her with superpower functions if she dares to wear anything over or under its hypermembrane. (Note that we did not see Emp using any actual powers during “Not Very Secret,” but only standing around as the other Superhomeys argued battle tactics.) The concept, in part, is that Emp’s enigmatic supersuit is a jealous and mercurial mistress indeed, and brooks no interference by other articles of clothing.

Should be noted, though, that Emp would, presumably, already have figured out that the suit malfunctions when worn over underwear before she joined the Superhomeys. So, why exactly was she wearing underpants during this volume’s first story? The real-world explanation is, of course, that I hadn’t thought up the “unreliable supersuit” riff at the time I wrote said story. Ah, but what’s the after-the-fact, “No-Prize”-style, in-universe rationalization for this error? Perhaps Emp felt so nervous at meeting—and joining—the team that she wore underwear beneath the suit in a desperate attempt to feel a little less naked in front of them? If a better explanation occurs to you, feel free to post it in the comments below.

One other amusing note from panel 1… Take a gander at the hilariously sketchy background of the shot, which shows the lone detail that Empowered vol. 1 ever depicts in regard to the Superhomeys HQ: Pillars! A few lines vaguely indicating classical-looking pillars! Oh, how I miss the halcyon days of Empowered yore, when I felt like I could get away with such whimsical shenanigans.