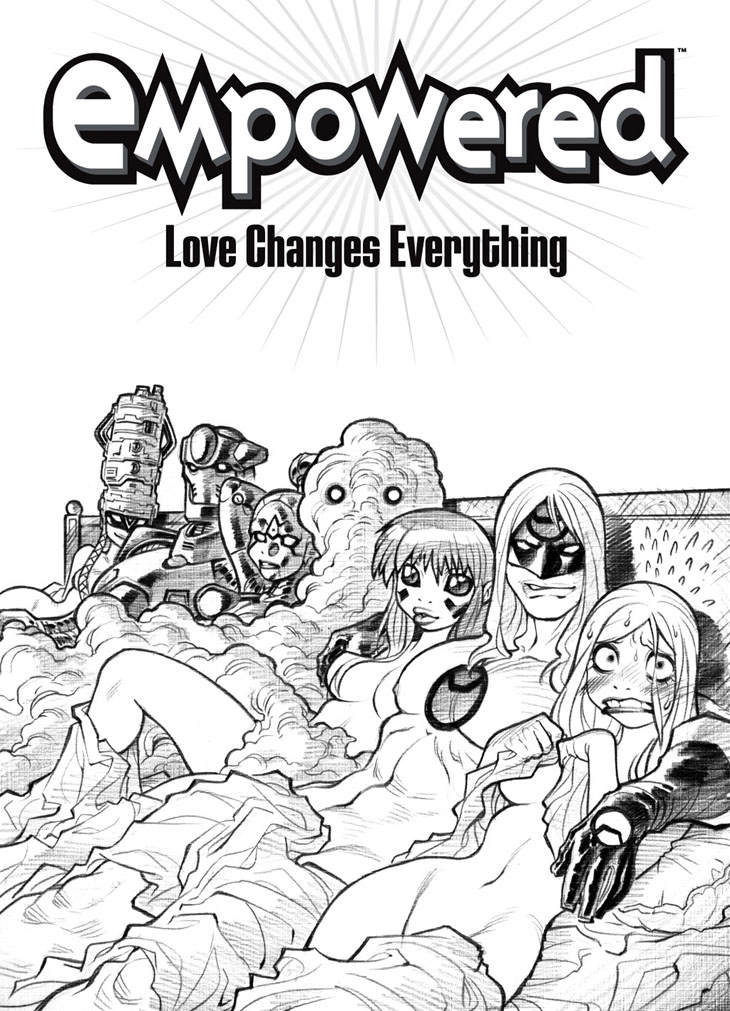 The notable string of solid stories in the back half of Empowered vol. 1 continues with “Love Changes Everything,” one of my personal favorites from the book, in which we learn some exciting new information about how certain suprahumans in the Empverse gained their powers. As we hit this long stretch of (IMHO) good stories, I feel a bit better about my decision to launch this webcomic serialization with a 100-odd pages of Empowered vol. 1 as an existing archive. As I mentioned earlier, I’ve recently been thinking that perhaps all of vol. 1 should’ve been available as an at-launch archive, and the actual serialization could’ve kicked off with Empowered vol. 2, which hews a bit closer to the “Big Action, Big Emo” ethos of the modern-day series that long-time readers have come to know. Then again, even vol. 2 is still rather a long ways off from the depth, intensity and emotional complexity of later volumes, so what the heck? In any event, no point in crying over spilled milk, or commenting over spilled milk, which seems more appropriate—okay, screw it, this metaphor’s been overstretched.

The perspective drawing, here, starts getting a tad wonky as we look down at Emp’s body in the foreground. Not sure if I was trying for a “fisheye lens” effect or not, but if so, I can’t say that the attempt worked out terribly well. On the other hand, Emp’s frazzled expression still works well to my jaded, present-day eyes, so 2006-Era Me has that going for him, which is nice.

I find myself amused by the fact that, according to this illustration, the Unnamed, Vaguely Russian-Sounding Superhero next to Emp apparently wears his costume’s mask and gloves in bed. Seems a bit of a stretch but, as we’ll soon see, peculiar sexual shenanigans are rather a thing in the Empverse.