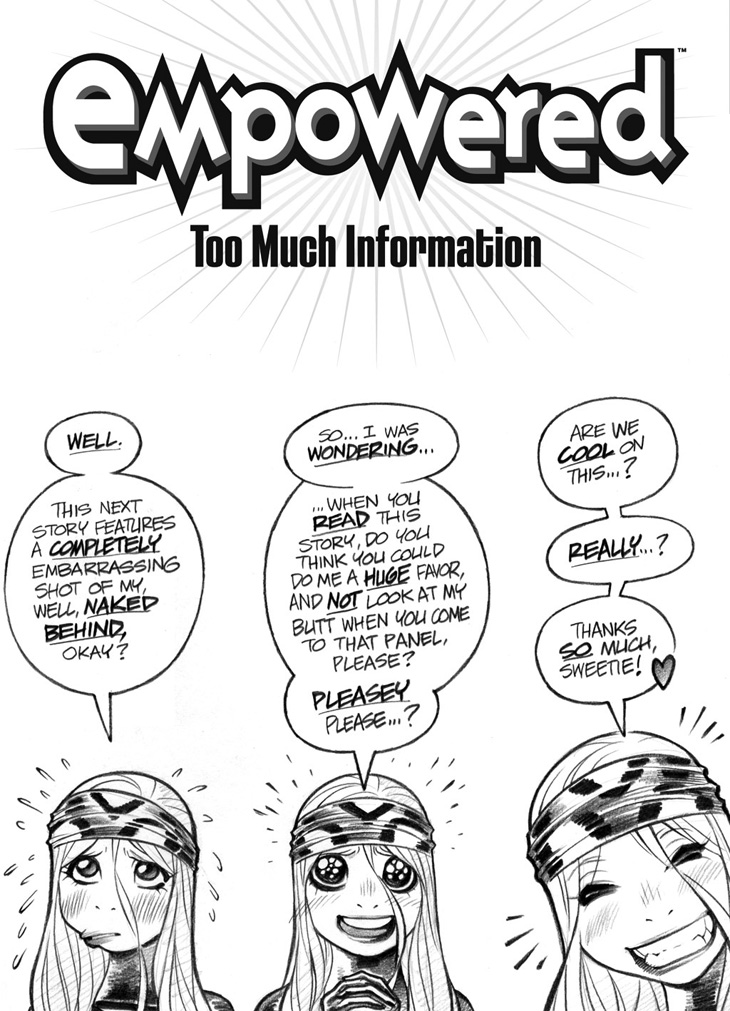 Huzzah! Metatextual Emp returns to the title-page arena for a brief, two-chapter appearance!

I suspect that this page’s pointedly fourth-wall-breaking riff was inspired by one of the few truly interesting and innovative children’s books I read as as wee lad: the famed Sesame Street classic, The Monster at the End of This Book, Starring Lovable, Furry Old Grover.

See, I apparently learned how to read out of sheer necessity from perusing old, wildly overdialogued Marvel reprints of cowboy comics like The Two-Gun Kid and The Rawhide Kid—you couldn’t just “look at the pictures” from those books, so laden down were they with narrative captions and expository dialogue. (This might explain my later escapades in excessive dialogue during Empowered vols. 4-6, unless it doesn’t.) So, when I later tried to read children’s books in the early 70s, I was repelled by not only their condescending and paternalistic vacuity, but their pathetic lack of blazing six-guns and “Injun attacks.” After a few stabs at the wan, cretinous, excitement-free state-of-the-70s-art kid’s lit, I moved on to the enticing world of “grown-up” books with Peter Benchley’s novel Jaws, and never looked back. (For the uninitiated, Jaws The Book boasts some rather notable differences from Jaws The Movie, such as a surreal dream sequence containing the evocative phrase “yawning vagina.”)

Ah, but The Monster at the End of This Book was a rare, possibly unique exception to the otherwise unrelieved schlock that passed for children’s literature during my formative years. I hadn’t yet learned the term “metatextual” circa age 5, but I was nonetheless blown away by the unprecedented narrative audacity as an increasingly desperate Grover struggled in vain to keep me from turning to the end of the book. And needless to say—uh, SPOILER ALERT?—poor Metatextual Emp will fare no better than the similarly unfortunate Grover in her plaintive appeal to You, The Reader. Sorry, ’bout that, Emp—and, decades after the fact, I should probably add, “Sorry, Grover.”