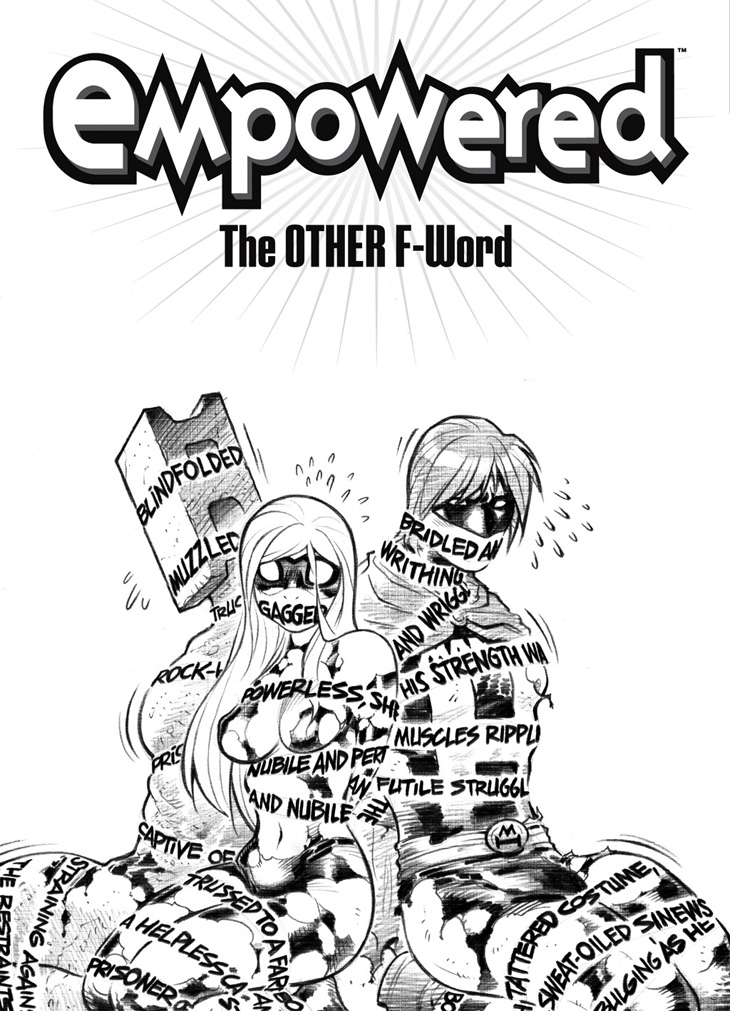 CRASSLY COMMERCIAL UPDATE, effective through 4/21/2016: In the interests of commercial floggery, I should hasten to mention that Comixology is holding a "Dark Horse Heroines Who Rule" sale on digital comics, including all volumes of Empowered. In case you'd like to jump ahead—waaaaaay ahead—of the vol.1 stories currently being serialized on this site, through 4/21 you can snag all 10 existing volumes of Empowered for the sale price of $5.99 each, as opposed to the normal price of $9.99. Here's a link to the sale (or you can just click the Comxology link in the upper right of this page).

For newbie webcomic readers: Can you guess what the “Other F-Word” mentioned in the title might be? For whatever it’s worth, I’m reasonably sure that you’ll figure it out well before the story’s actual reveal of what said “F-Word” turns out to be. In any event, the topic this story addresses becomes a bit of a recurring theme throughout the series, as with a fair number of these foundational Empowered stories.

Stand by, readers who have struggled through these 200-odd pages of commentaries so far: I am, at last, planning to post my detailed, Twitter-format explanation of the oft-mentioned but never clarified Mysteriously Intermittent Post-Millennial Torso Glitch that has popped up at random throughout these Empowered vol. 1 pages. No, really! In truth, I wrote up a very long “draft tweet” exploration of this peculiar—and now vanished—art idiosyncrasy of mine a few years ago during an extended airport layover, but have never gotten around to putting it on Twitter. I mentioned the concept to a fellow comics professional around that time, and he thought it would be a godawfully bad idea to talk about this issue; guess we’ll find out whether or not he was right in a few days, when I choose a Torso Glitch in this story to hang the commentary on.

Honestly, Emp’s figure on this very page is a decent example of the dreaded Mysteriously Intermittent Post-Millennial Torso Glitch, but I want to find an even clearer and more pronounced case for the commentary. In any event, the Glitch ran its course rather a while ago—hence the “Post-Millennial” bit, though the timeframe extends out to roughly 2010 or so. Happily, Emp appearing excessively wasp-waisted in Empowered is, uh, not really a problem for my current artwork. If anything, nowadays I have to watch out that I don’t go overboard with my preference for depicting her body as a bit softer, fuller and, well, “fleshier” in a belated attempt to differentiate her from the theoretically more idealized physiques of, say, Ninjette or Sistah Spooky.

So, stay tuned, long-suffering commentary readers, as soon all will be explained! And next time on Empowered, brace yourself for a very, very literal of dose of cheesecake. (As in, Emp actually eats some cheesecake. Exciting, huh?)