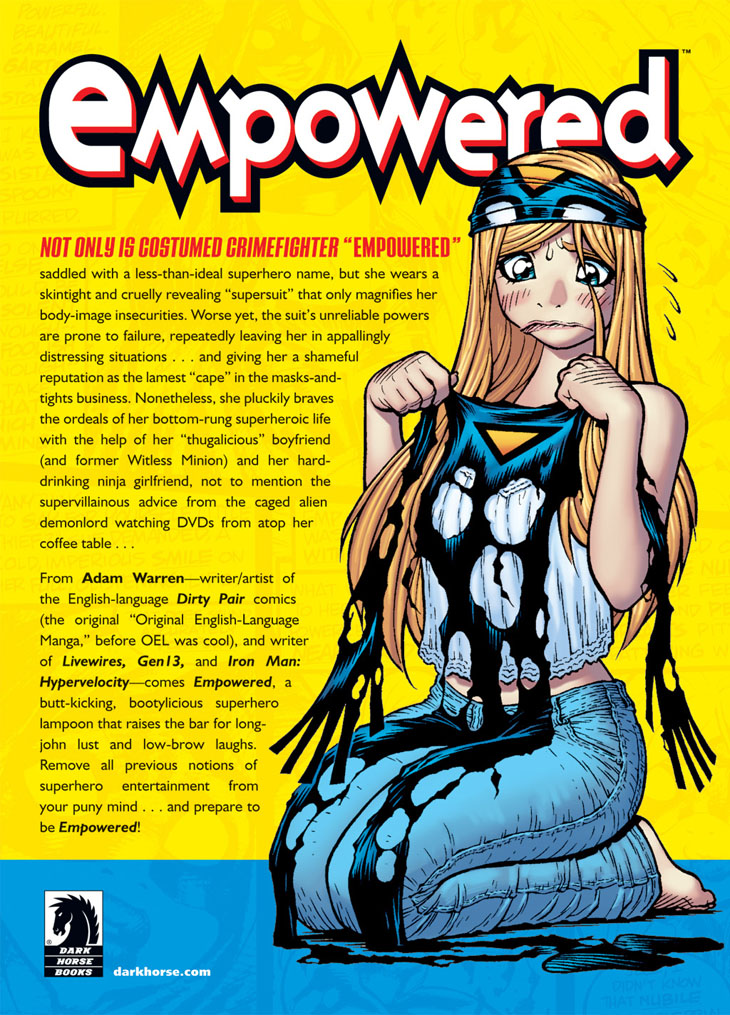 I’ve decided to close out the Empowered vol. 1 experience by posting the book’s back cover because, well, why the heck not?

Note that Emp’s supersuit never quite seems to tatter and tear in the manner indicated on the back-cover illo, which would certainly leave Emp’s chest hanging out in the breeze. Mysterious! Note also that I draw the “fingers” of Emp’s suit squared-off just because that, to my eye, conveys better the unearthly hypermembrane’s two-dimensional flatness and thinness when our heroine isn’t, well, filling it out in three dimensions.

Long-time readers will note that the back-cover copy of every Empowered volume always features the phrase “costumed crimefighter ‘Empowered’” in the first sentence, just because repeating that term as a ritualized part of the text appeals to me for some reason.

To be honest, we should probably cut paragraph 2’s increasingly anachronistic line about “The original ‘Original English-Language Manga,” before OEL was cool.” Given that TokyoPop’s infamous—and famously creator-screwing—“OEL” program is probably remembered nowadays as little more than an obscure footnote in the early careers of comics heavy-hitters like Brandon Graham, Becky Cloonan, Sophie Campbell, Amy Reeder and Felipe Smith (among many), we probably shouldn’t be bothering with such a dated reference, I suppose.

Speaking of dated references, my old projects Livewires, Gen13 and Iron Man: Hypervelocity are likewise blueshifting—whoops, I meant redshifting—into receding relevance as the years pass, I’m afraid. I should probably patch in a slightly more recent reference to Galacta: Daughter of Galactus, the project and character that artist Hector Sevilla Lujan, editor Jordan White and myself created for Marvel back in 2009-2010. God knows that poor Gali’s one-shot sold as dismally as Livewires or Hypervelocity, but at least the Galacta: Daughter of Galactus title jumps off the page better with its sheer “WFT”-iness.