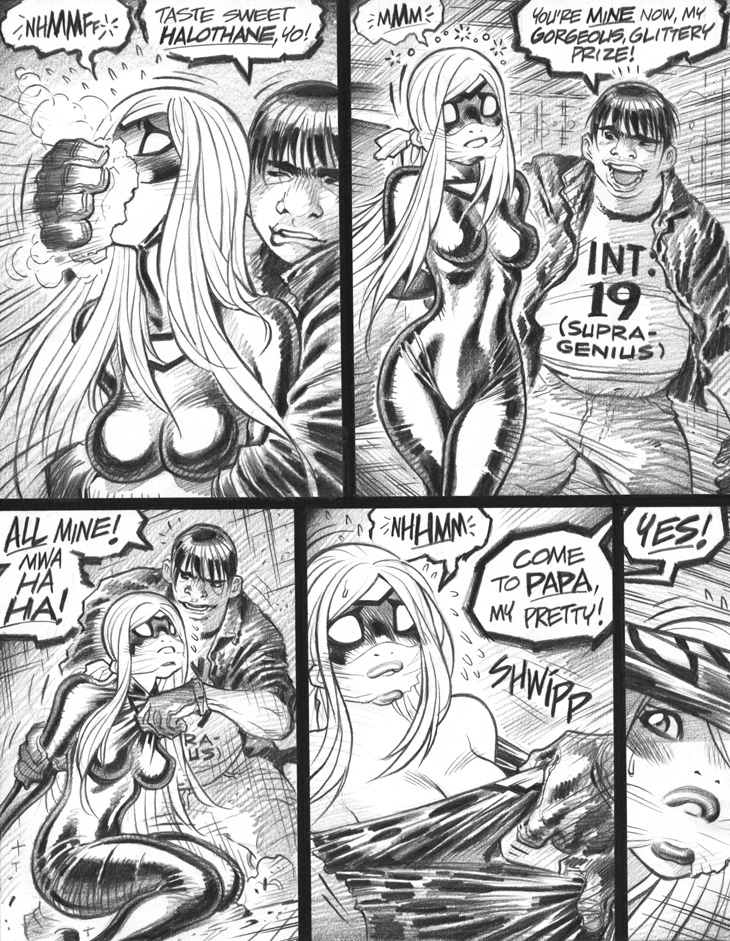 In panel 1, poor Emp is being “laid low”—a popular euphemism amongst “damsel-in distress” aficionados, I’ve learned—by halothane, a fairly obscure anesthetic. Why halothane, you might ask, as opposed to the far more common superhero trope of chloroform? Well, I thought the idea of a superheroine laid low by chloroform might be a little tired and overused, and decided to roll with halothane instead—which can’t, by the way, be administered in the manner I depict, but let’s ignore that little problem.

After this page saw publication in Empowered vol. 1, I stumbled across discussion of the book online, and was mildly startled to discover that I’d managed to offend a group of whose existence I was naively unaware: namely, chloroform fetishists! They were understandably critical of the use of humdrum, less-than-hawt halothane, perceiving it as censorship forced on me by my puritanical publishers, who had apparently thought that chloroform would’ve too sexy, too erotic, too controversial for the masses. (For the record, that was not, in fact, the case.) I was so tickled by the concept of easily riled chloroform enthusiasts that, later on in the series, I created the anaesthetic-aroused supervillain Choloformaster, who shared similarly contemptuous views towards the vanilla safeness represented by halothane.

In panel 2, I rather badly botched Emp’s body proportions, alas. We also see the appearance of an artistic flaw that plagued my work for a good chunk of the decade, a mysterious and sporadically recurring error of “eyeballed” figure drawing that I’ve dubbed The Intermittent Post-Millennial Torso Glitch. (More on that little problem later.) Note also panel 2’s invocation of a riff that would likewise recur throughout this arc of the series: Dudes sporting T-shirts that boast strong stats based on Advanced Dungeons and Dragons characteristics. Here, our hapless halothane-wielder’s shirt brags of a very high level—in fact, a SupraGenius level—of the roleplaying game's Intelligence characteristic.