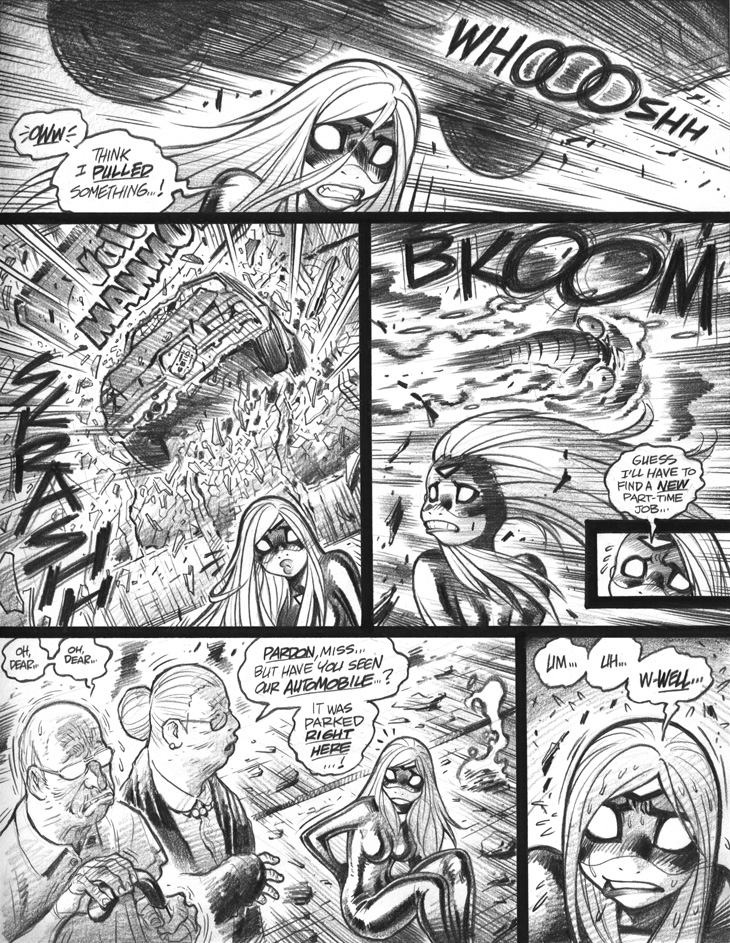 Behold, in panels 3-6, an early instance of a long-running gag that recurs endlessly throughout Empowered’s thousands of pages: the goofily undeniable fact that, during action sequences, Emp’s hairstyle magically resets itself between panels. In panel 3, her hair is tucked back behind her (unseen) right ear; in panels 4 and 5 her hair is violently blown back by the car’s explosion; then, in panel 6, her hair is once again tucked back behind her ear. Early on, this magical quality of Emp’s eerily persistent hairstyle was intended purely as a visual joke for my own amusement; in truth, the entire series is infested with odd little quirks like this, quirks which I’m fairly sure that only I can appreciate. As the great Craig Ferguson used to say, “I made myself laugh, and that’s half the battle.”

Even as Empowered grew and evolved and (arguably) matured into “a real comic” for me, I retained the oddity of Emp’s perpetually resetting coiffure. At one point, I briefly considered a chain of flashbacks that would show that, between panels, Emp was laboriously tucking her hair back after every single time it was “disheveled in action,” but that seemed a tad over the top. Nowadays, on the rare occasions that I bother to consider a No-Prize-ish explanation of this phenomenon, I presume that the powers of our heroine’s ever-enigmatic supersuit are somehow involved. (You’ll note that Emp’s long hair—seemingly a liability in hand-to-hand action, as countless YouTube girl-on-girl fights have shown us—never, ever gets grabbed or pulled or snagged. That, I can say with certainty, is definitely her supersuit at work. Flowing, frictionless tresses ahoy!)