Panel 1: "HOOG" being an utterance cribbed from Stephen King's Misery, of all places; that's the exclamation Annie Wilkes makes after being clubbed with a typewriter, which I've used periodically ever since as it amuses me to no end.

Panel 2: "B.C." arguably being the easiest-to-guess initials for a supranym in the entire series.

UPDATE: At long last, the announcement for Empowered vol.12's publication date and subject matter has gone live at Dark Horse online! Due out June 7, 2023 in comics stores and June 20 in bookstores (got bumped back from March, alas), here's the book's cover: 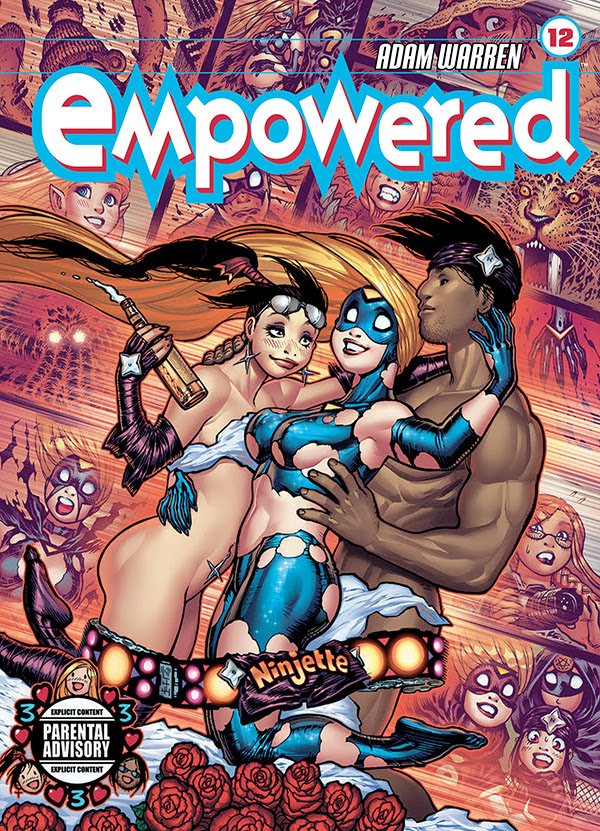 Costumed crimefighter Empowered is trapped in a surreal nightmare scenario as her universe begins spontaneously rebooting again and again, with each variation more twisted and bizarre than the last! Can our befuddled superheroine somehow undo this inexplicable Neverending Reboot—while simultaneously steering her love life in a boldly polyamorous new direction with Thugboy and Ninjette!—or is this The End for Emp and her chaotically convulsing cosmos?

More on this matter later, needless to say; in the meantime, just thought I'd tack a notice onto the newest webcomic page after Dark Horse's announcement.