Does the dark-haired chica in the upper right look at all familiar to you, new(ish) webcomic reader? I sincerely doubt it, unless you have an amazingly good recollection of characters with cameo appearances in the early stories from Empowered vol. 1. Then again, Emp fails to recognize her as well—and she has less of an excuse, given that she met the character in the flesh, as opposed to the reader only briefly glimpsing her as a low-resolution pencil drawing. Well, worry not, as you’ll soon be clued in as to where she previously appeared and, more importantly, the context in which she met Emp, which leads to problems for our heroine.

Speaking of problems, “The Aryan Ideal of Shoulder Candy” proved to be a notably problematic episode in the Empowered oeuvre, for reasons I shall no doubt discuss at length. A key—if idiosyncratic—element of the Empverse, the so-called “Unwritten Rules” governing interactions with suprahumanity, came about directly because of this story—though too late to spare our heroine from from some seriously inappropriate interactions. To be honest, I might’ve considered spiking this story outright from this webcomic serialization, save that it introduces some fairly important characters and concepts.

And still speaking of problems, I once again botched poor Emp’s torso in this shot, though in a rather peculiar manner. For reasons now unclear to me, I clearly didn’t sketch out her figure first before adding Sistah Spooky’s cape breaking up the line of her body. Instead, I drew Emp’s torso with Spooky’s obscuring cape already in place, which led me to draw her midsection waaaaay too elongated. In fact, unlike the warped skinniness seen in more typical examples of the Mysteriously Intermittent Post-Millennial Torso Glitch, Emp’s figure would be perfectly acceptable if her two halves were moved closer together and lined up more properly in Photoshop. In fact, here’s a quick stab at what I mean: 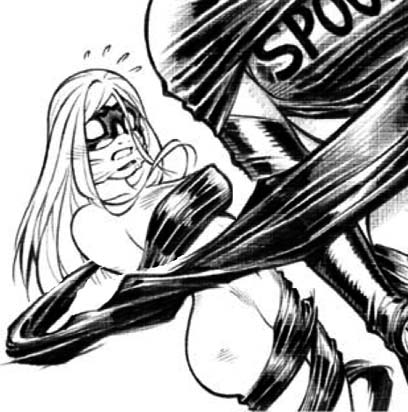 The lesson, here, for comics artists? In most cases where a human figure is cut off and obscured by a visual element or a panel border, you’re strongly advised to draw a fully intact version of the figure first, either on the initial rough or on a separate piece of paper. Otherwise, glitches or outright disaster may well result, my presumably young(er) padawan.