Panel 1: Amused to realize that, with Emp’s kicking pose here, that I was repeating an image that I first stole—or referenced, more charitably—decades ago from a comics panel drawn by the late, great Dave Stevens of The Rocketeer fame. Specifically, way back in the early days on my run on Dirty Pair, I borrowed a "kick" image from the 1983 story “Princess Pam,” on which Dave’s credited only with inking over Bruce Jones pencils—but, c’mon folks, the title character looks like pure-strain Stevens all the way, as seen below: 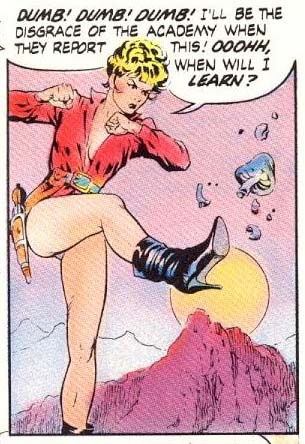 The funny part is, I wasn’t directly referencing that "Princess Pam" panel for Emp’s legs in this Empowered shot—rather, I was repeating a pose I’d borrowed from long, long before. (In fact, I can no longer recall the specific Dirty Pair panel it inspired.) Only looking at it now do I recall where this very particular “kick” image originated.

Gotta say, Dave Stevens was one of the few American comics artists whose work had any major influence on mine in the years after I first discovered manga. At a time when I was otherwise frantically cribbing from mangaka like Otomo Katsuhiro, Rumiko Takahashi, Kenichi Sonoda, Yoshikazu Yasuhiro and Shiro Masamune, Dave’s gorgeous approach to “good girl” artwork was massively influential to me during my early career of writing and drawing The Dirty Pair. I even got to meet Dave a few times at San Diego Comic-Con back in the day, and he was always kind to me and unfailingly supportive of my work, which was a huge boost for a young artist grinding through his struggling early years in the comics field. (Well, as opposed to my arguably more struggle-intensive later years in the comics field.)

Panel 2: I suspect—but, alas, cannot confirm—that Emp’s dialogue is this panel might be another reference to the old Pussycat Dolls song, “Don’t Cha,” as in, “Don’t cha wish your girlfriend was hot like me?” Not really a huge fan of the song—no, really!—yet here it might be making its second appearance in the series.