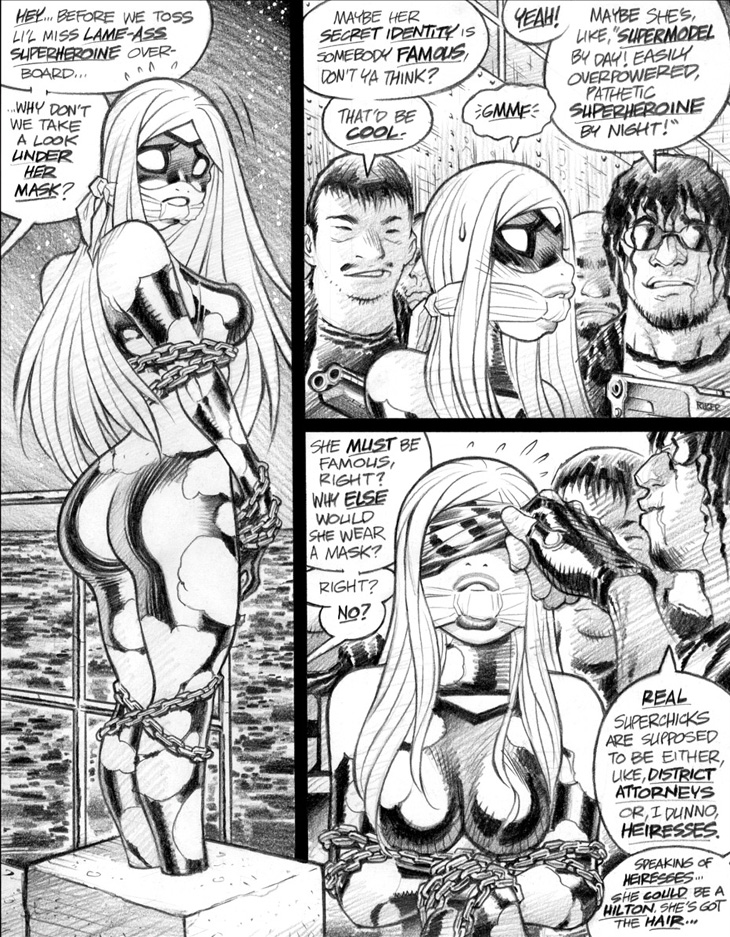 Behold, the first appearance of Emp as a “damsel in distress,” which is a trope that will long plague our beleaguered heroine. As Emp herself will later address in one of her metatextual chapter-break pages, she was created quite by accident during a low ebb in my career—one of many such low ebbs, in an all honesty. At a time when I could no longer rely on getting work from Marvel or DC, I wound up cranking  out pin-up illos for a generous group of "damsel in distress" (a.k.a. "DiD") aficionados, with tied-up superheroines being a frequent sketch request. As I'm easily bored by having to draw pin-up illos, however, I soon defaulted to drawing story pages about an often-distressed superheroine, imagining what the heck was going through the mind of a character having to endure these humiliating scenarios. Long story short-ish, that initial clump of goofy, throwaway-joke short stories mutated and evolved and reworked itself into a more complex form that would eventually be published as Empowered. (I'll go into more detail on the series' creative evolution later, I assure—or warn—you.)

At the bottom of panel 1, note the appearance of another, far more obscure pop-culture trope that was all the rage in the crappy TV of my 70s childhood: namely, the fact that Emp is standing in a block of presumably (very) quick-drying concrete, rather than the more practical approach of having a separate such block chained to her legs. This odd trope amused me even as a child, especially as a child who had mixed a great deal of concrete (while helping renovate an old house). Clearly, these were bad guys with plenty of time on their hands, waiting hours while the poured concrete slowly, ever so slowly dried around our heroine’s feet… Actually, this might be a fun joke to revisit! (“Stop moving, or the concrete won’t dry, okay?”)