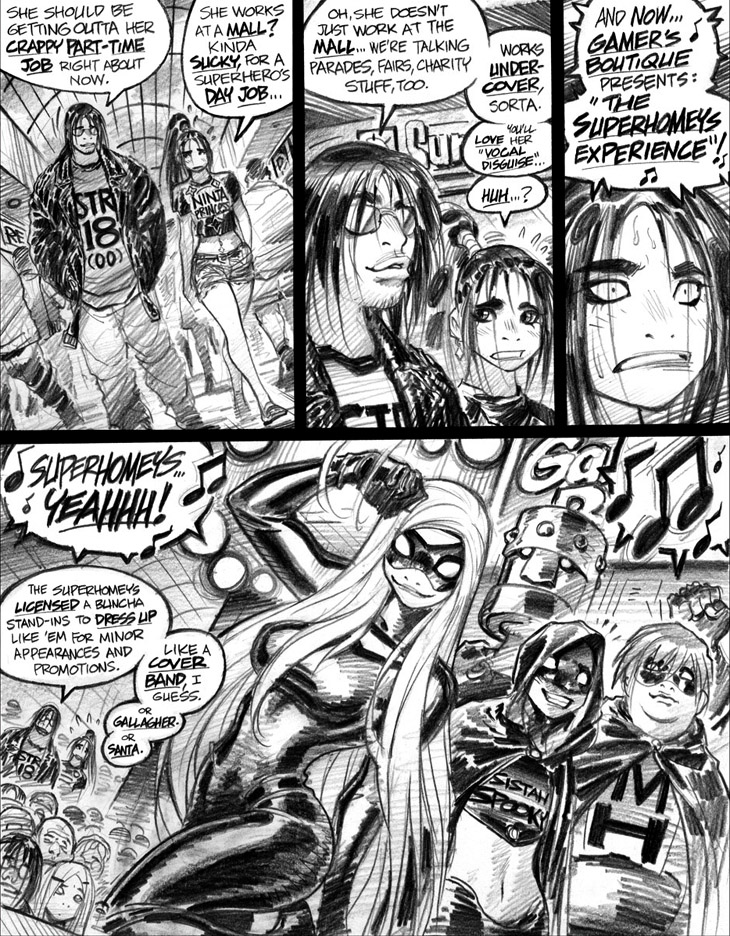 Note that this story takes place in a shopping mall, for possibly the only time in all of Empowered’s 2000+ pages so far. I mention this because the first two Gen13 stories I wrote and drew for Wildstorm in the late 90s—Grunge! The Movie and Magical Drama Queen Roxy—boasted extensive scenes set in malls, drawn from veritable scads and oodles of So Cal photoreference I shot myself. You might wonder, why didn’t I reuse any of that photoref for further mall sequences in Empowered? The answer: Because I frickin’ despise drawing contemporary urban (or suburban) settings, regardless of the reference on hand. In a comic series designed for speed—and ease—of production, screwing around with painstaking background detail of this sort was not something I found terribly appealing.

Odd side note: A friend of mine is, I think, pursuing a long-term plan to drive me insane by constantly mentioning that his favorite moments from my entire comics oeuvre were the shopping mall sequences from Grunge! The Movie and Magical Drama Queen Roxy. That is, he claims to love the detailed, real-life-based background work considerably more than any of the hundreds of pages of other comics I’ve drawn with futuristic environments created from whole cloth. For some reason, this bugs the hell outta me. I often tell him, “Hey, I could’ve just traced those mall shots from the photoreference, okay?” For the record, I didn’t trace off those backgrounds, though that would’ve been a smarter choice—but I gather that this dogged yet misguided gruntwork on my part is what impresses my friend about those Gen13 pages. Like, whatevs, dude.