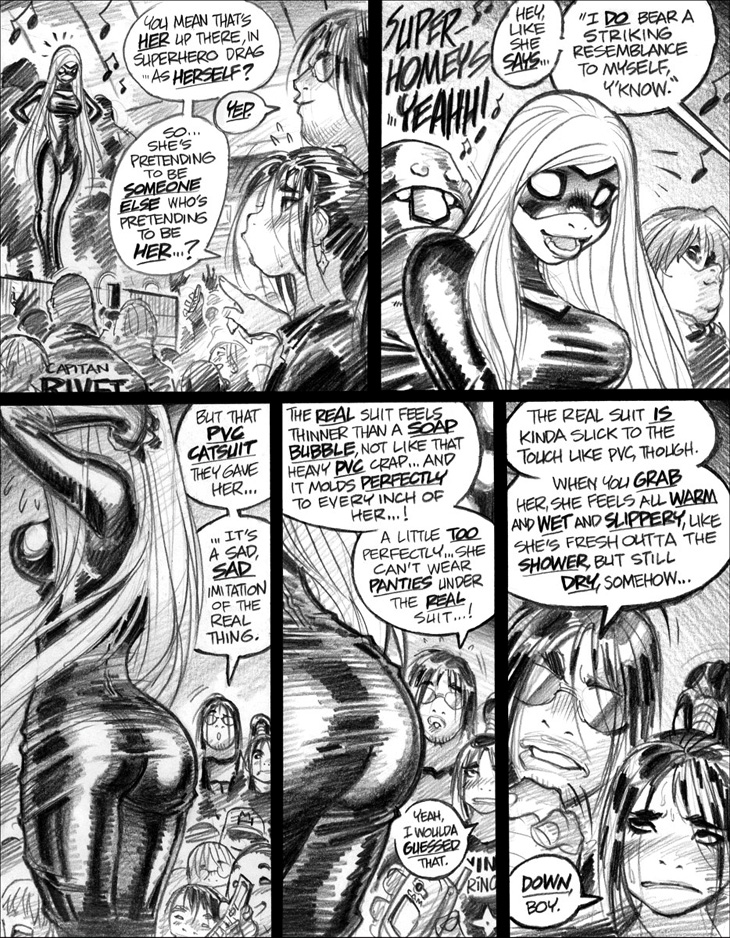 Far more likely, I think, that Emp would wear a Spandex® or Lycra® bodysuit than a PVC or latex-based costume for her part-time job of cosplaying as herself. However, I find Spandex® to be somehow both challenging and boring to draw, as its peculiarly annoying, grainy “texture” (or lack thereof) and featureless appearance (that is, its lack of folds and wrinkles) frustrate my art technique to no end. Plus, for all the oft-mentioned tightness of stretch-fabric bodysuits, they’re not particularly impressive in regards to revealing much about the body wearing them, creating instead an anonymous, detail-free “sausage casing” of a costume. (Whatever the hell material that the muscle-fiber-flaunting costumes of hypervascular male superheroes are made out of, it certainly isn't Lycra®, folks.) To accurately depict a Spandex® superhero costume, best to just draw the figure’s outline and have the colorist fill in the rest with color and highlights—with that annoying, grainy texture added in, of course.

So, I opted for the visually more impressive medium of PVC for Emp’s little cosplay outfit, here. Not, by the way, that I attempted a truly realistic depiction of a latex-style bodysuit, as a true-to-life rendering of a dark PVC costume would be little more than a black silhouette with a series of glossy highlights. (Pretty sure that Adam Hughes may be the only artist in the comics field to accurately draw true-to-life latex costumes, whereas the rest of us draw reality-divergent visual riffs suited to our particular rendering styles and preferences.)