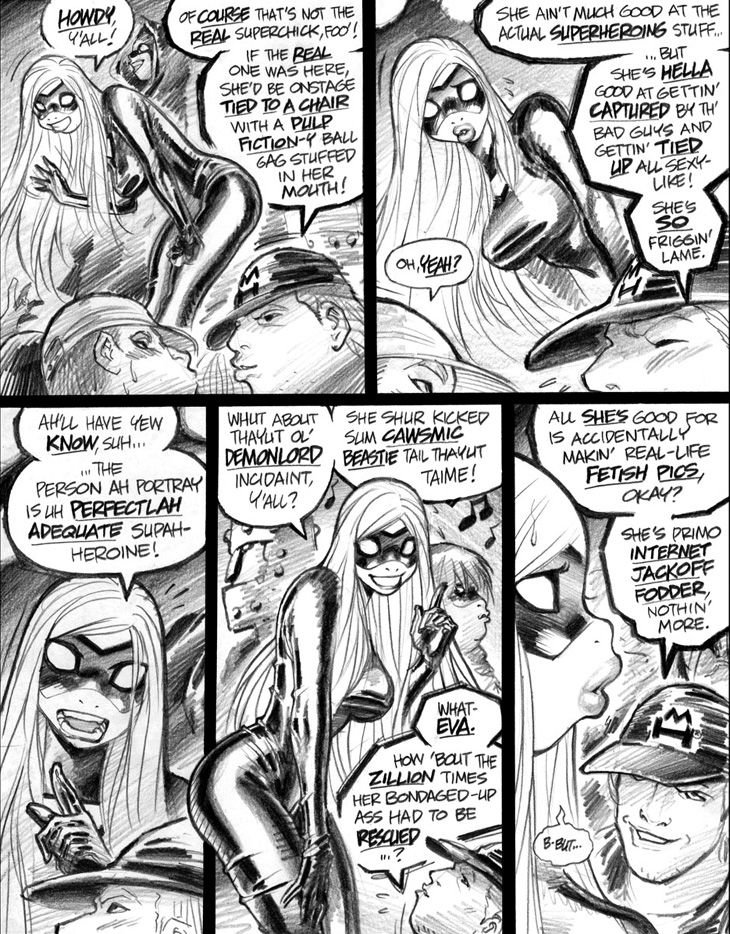 In panels 1 and 2, note that Emp’s PVC “cosplay” version of her costume looks especially different from her actual supersuit in one key area: namely, her chest. The material of the PVC suit, modeled from photoreference, displays stretch marks as it extends across Emp’s breasts, whereas her unearthly supersuit notably does not, as its supposedly molecule-thin “hypermembrane” is more akin to body paint than an actual fabric. (In truth, the supersuit’s alien material shouldn’t actually show many wrinkles or folds in the first place, but I feel that they add a bit of visual interest, so I slap ’em on regardless.)

I believe that Dirk Deppey sneeringly referred to this oft-seen, breast-molded characteristic of superheroines’ costumes as “boob socks,” a term which I’ve always intended to use in Empowered, but have never quite gotten around to referencing. Ah, but here’s the thing: While the stretch-marked chest of Emp’s PVC costume may be marginally more—ahem—“realistic” than her supersuit’s “boob socks,” I don’t really think the former is any less exploitative than the latter. As far as I'm concerned, lovingly rendering every photoreffed swell and wrinkle of life-drawn, latex-clad boobs is no less—ahem—“problematic” than a more reality-divergent approach. (Your Mileage May, of course, Vary on this topic.) That being said, I should probably add that the fetishwear photoreference I used for Emp’s cosplay suit, here, was quite clearly and deliberately designed to lift and display the lady cosplayer’s chest, which further confuses the “realism” issue a tad.

On the topic of Emp-related cosplay, years after this story was first published, ace cosplayer Riddle created her own, unsurprisingly snazzy-looking take on Emp’s suit—though fashioned from Spandex® instead of PVC, interestingly enough. In a bizarre twist of art imitating life imitating art, I wound up porting over elements from Riddle’s Emp cosplay into Emp’s fictional cosplay, most notably the addition of high heels. (“Why the heck does the fake version of my supersuit have high heels?” our heroine opines in Empowered vol.5.)

For clarity, attached below is a sketch I drew of Riddle's Emp cosplay, drawn from photoreference. Thrill to the first—and very likely last—time I've drawn a Spandex®-based Emp costume!