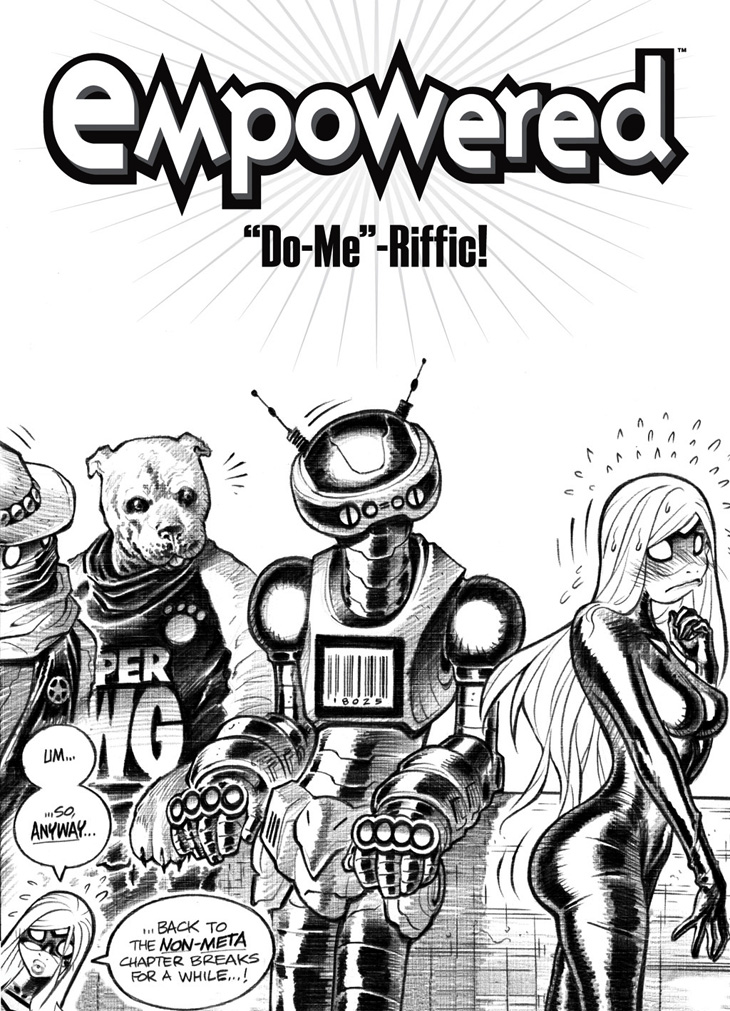 So, yeahp, as of this Empowered vol.1 story I switched back to the format of non-metatextual illustrations for the chapter breaks for a while, emulating the title-page practice used in manga tankoubon, or trade paperbacks. (Of course, the issue is confused a tad by the fact that Meta Emp is intruding on an otherwise non-meta illo to let the reader know that the next bunch of title pages will be meta-free.)

If you find yourself annoyed by the as-yet-unnamed “herodroid” Robotronik fixing the ol’ Male Gaze (Cybernetic Edition) on poor, flustered Emp’s behind, here, you can rest assured that, later on in the series, the ill-fated mech experiences a strong dose of objectification for himself. (A fiery if not superheated dose of objectification, in fact.) No such fate for animalcape “SuperDawg” next to him, though, who may well still be ogling passing superheroines somewhere in the Empverse at this very moment. (Or not, as ogling passing superheroines in the Empverse often proves to be strongly inadvisable, given that most superchicas are notably more ornery than shy, insecure, Empowered vol. 1-era Emp.)

Not a great figure drawing of Emp, alas, especially since she appears to be rocking an unusual gait in which her right arm and leg are swinging forward at the same time. (For the non-artists out there, one’s left leg and right arm are supposed to swing forward when walking, and vice-versa.) Well, here’s my No-Prize non-explanation for this goofy pose: Perhaps Emp is so flustered and discombobulated by the SuperMale Gazes plastered to her supersuit-clad rear end that she’s walking in a visibly, indeed wildly flustered and discombobulated manner. (I don’t actually think so, but gamely attempting to rationalize obvious goofiness is half of the fun of these early Empowered stories.)