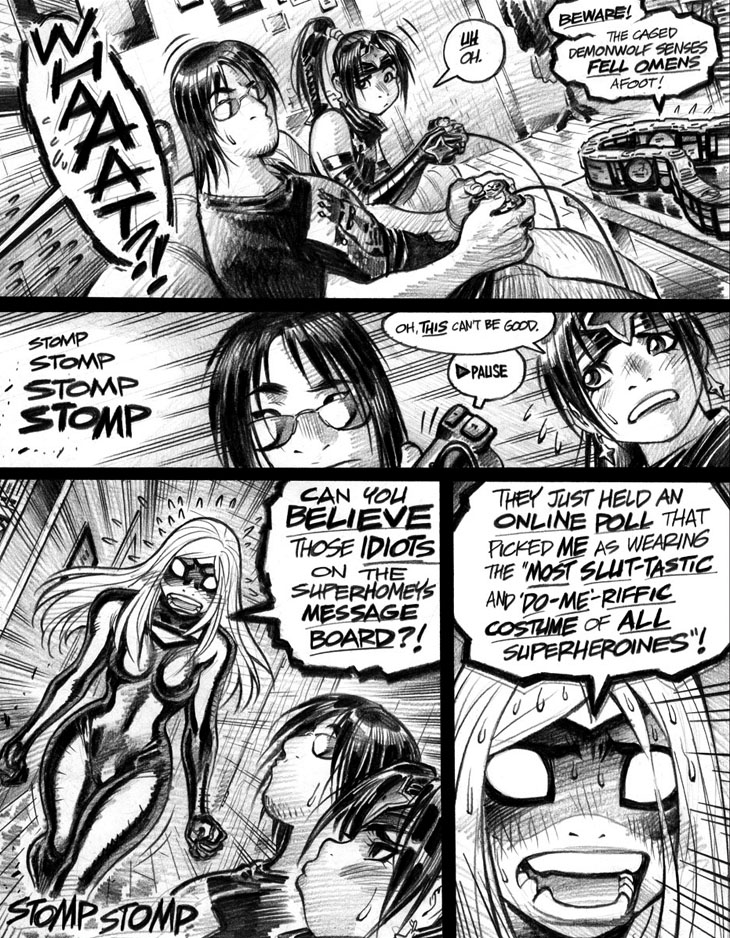 Note that panels 1 and 3 feature a pair of camera angles that are extraordinarily rare for this series: namely, shots looking up and down the long axis of Emp’s apartment. You’ll notice that most panels depicting, say, Emp’s living room are staged to look across the apartment’s short axis, with a 3/4 view of her couch framed against the wall behind it. These shots are simple, quick to draw, and difficult to screw up, as opposed to the far greater perspective challenges inherent to camera view gazing down the hallway or out to the front door.

Another reason these particular camera angles are rarely used is the fact that they involve one-point perspective, which trips all my artistic alarms when used for anything other than a first-person POV shot—or, I suppose, a Wes Anderson “planimetric view” parody. Seriously, fledgling artists, be wary of one-point perspective, as its use outside of very specific and deliberately planned shots tends to scream, “I don’t know a g-d thing about drawing perspective!” Not that being ignorant of perspective is an insurmountable creative obstacle—I myself know very little, to be unflatteringly honest—but I see no point in making your artistic shortcomings blatantly obvious. More specifically, never screw around with one-point perspective in a context where two- or three-point perspective could be used—it may seem easier to do, but the resulting drawing all too often winds up fatally flawed.

I should mention another “long-axis vs. short-axis” drawing issue that just occurred to me, in the context of drawing “downtown city” shots—which, by the way, I absolutely detest having to do, explaining why you see very, very few such panels in Empowered vol. 1. Anyhoo, when narrative circumstances force me to draw street-level urban environments, I almost always draw a “short-axis” city shot, looking from one side of the street to the other. This sets up only limited artistic challenges, requiring only the construction of a background perspective grid for the backdrop buildings and a foreground grid for the sidewalk and pavement. By contrast, a “long-axis” city shot looks down the street and poses heavy-duty perspective challenges and a maddening level of detail work: foreshortened rows of building windows, oodles of commercial and traffic signage, receding ranks of crowds, cars and buses, not to mention distant-background cityscape elements that are rarely used in short-axis, “across the street” shots. (Though, I should note, the “down the street” shot is very often an artistic context in which one-point perspective is called for.)

If you choose to go “long-axis” on your street drawings, I salute you, as you’re clearly a far more dedicated artist than yours truly. Then again, that wouldn’t be a terribly difficult achievement, as I’ve never considered myself to be an—ahem—“dedicated artist” as such.