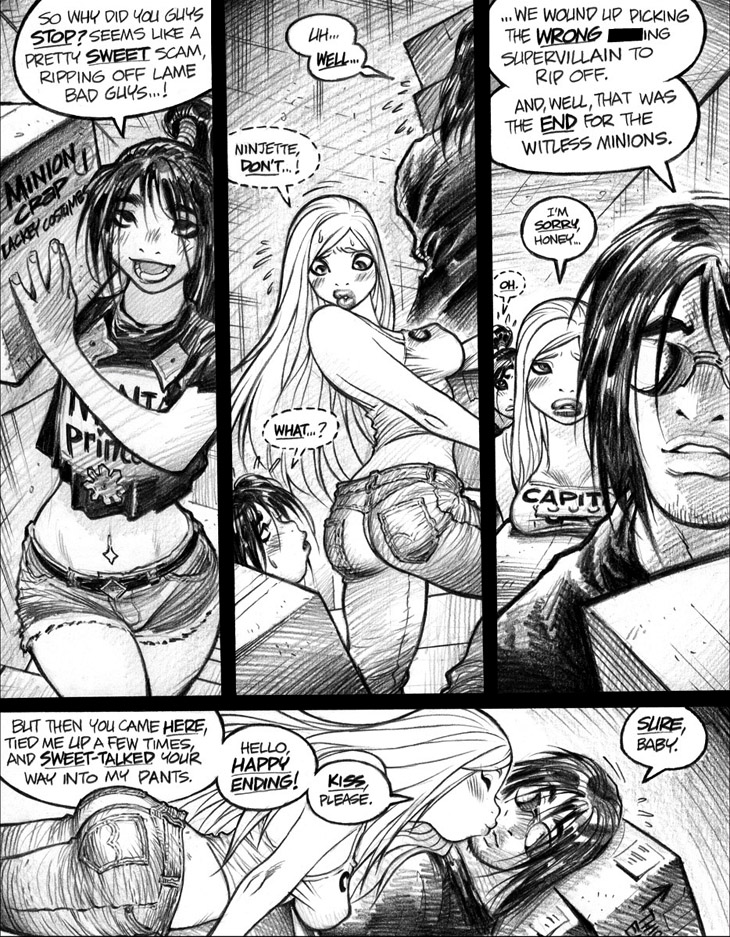 Note, in panel 1, a rare occasion in which I bungle Ninjette’s figure proportions by making her head a tad too small in relation to the rest of her body, as opposed to my more common error of making her head too large for her body. Also, yikes, is that “belly shirt” short, in this shot.

Note also, in panels 2 and 4, that Emp doesn’t need to wear a skintight supersuit for her Demonwolf-dubbed “toothsome rump” to be rendered prominent. Now, I was planning to go off on a semi-relevant tangent about the J-Pop-popularized term “fan service”—which has gone on to become a familiar fixture in Western geek culture—but I’ve changed my mind. (For the record, I believe that the term “fan service” is technically a misnomer, but I’ll have to address that microcontroversy in a future commentary.)

You may have noticed by now that, for all the bajillion commentaries I’ve written for this webcomic serialization, I never quite seem to directly address any, uh, “Big Questions” about Empowered—as in, what I’m Really Doing with the series, or at least what I think that I’m Really Doing with it. Well, here’s the thing: I have absolutely no interest whatsoever in yammering on about such matters of—ahem—“Authorial Intent.”

Part of my disinterest about such discussions is that the project as a whole is a mash-up of both the intended and the unintended, a happy mess that alternates careful, long-term planning with wildly spontaneous choices. Some stories feature themes and concepts that were deliberate and intentional inclusions on my part, while others were wholly unplanned  flights of whimsy that serendipitously blundered into deeper and more fascinating territory. Sometimes, especially later on in the series, I wound up steering the Empowered narrative in directions that I didn’t consciously plan to take. In a much later episode, for example, Sistah Spooky’s ambivalence towards her Brilliant Career strongly reflects my personal ambivalence towards my own Brilliant Career—but this wasn’t a conscious choice on my part, as I only grasped the parallels after writing the story. (Probably doesn’t say much good about my life that very few people know me well enough to correctly perceive when Empowered is waxing autobiographical.)

Years back, I remember seeing this amusing quote online: “Warren Ellis swears up and down that Empowered is a satire.” First of all, leave poor Warren Ellis out of this. I know we’re both comics writers with beards who have “Warren” in our names, but the similarities aren’t so overwhelming that we should necessarily be mistaken for each other. Second of all, assuming that the quote was actually referring to me, I don’t swear up and down that Empowered is a satire. Nowadays, all I ever say to define the series is the well-honed line that it’s “a ‘sexy superhero comedy,’ except when it isn’t.” (As seen at the top of this very webpage, of course.)

Is Empowered a parody? A satire? A pastiche? A deconstruction? A blatant example of that which it supposedly criticizes? A miserablist wallow? An exorcism of my long-discarded childhood love of superheroes? A desperate cashgrab? None of the above? I leave that to the reader to decide, rather than trying to hand down the (figurative) Word of God as to what The Correct Interpretation of Empowered is supposed to be.

Besides, what I would have to say about—ahem—What Empowered Means would, IMHO, be considerably less interesting than what others have already said about the series. I’ve read complex analyses of the series by readers and critics that are far pithier, compelling and thought-provoking than anything I could have written myself, alas. So, for the time being, I’ll stick to actually producing the comic and leave the complex analyses to others better suited to the task—and, in these commentaries, addressing a panoply of Not-So-Big Questions about Empowered.