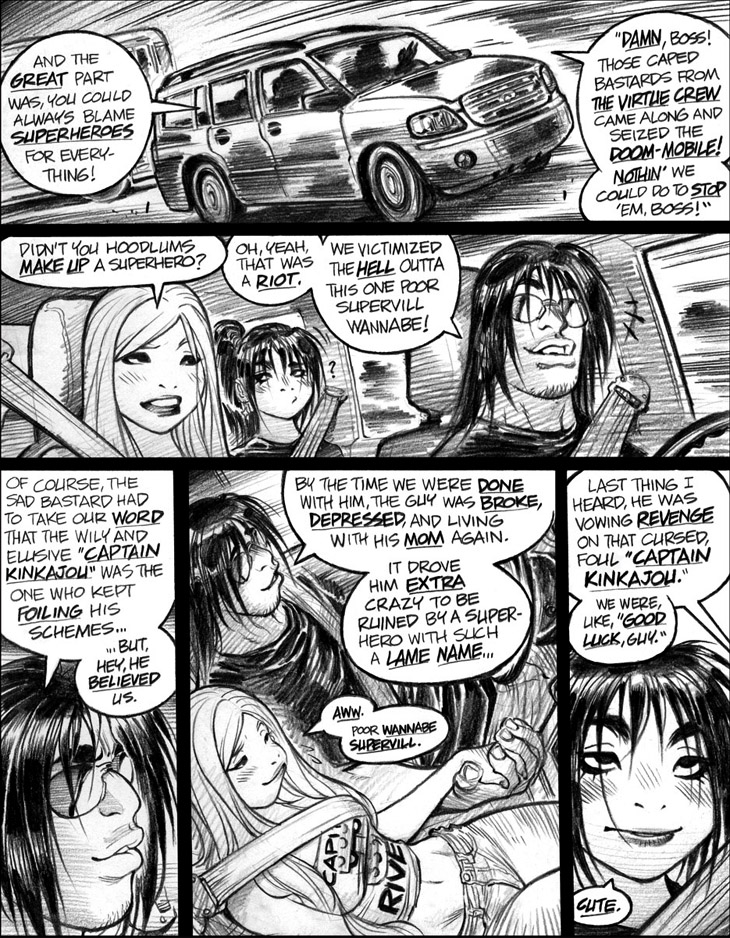 Behold, in panel 1, one of the greatest puzzles of Empowered, a long-running and perplexing enigma that I’ve never quite seen fit to address. What’s that, you ask? Why, it’s the matter of Emp’s mysterious SUV! This baffling vehicle only appears a grand total of three times during the series’ 2000-odd pages, yet raises many, many questions. Is Emp actually a car owner? Why do we so rarely see the SUV? Wouldn’t automobile insurance be extra-pricey in a city so rife with disaster and acts of God(-like doofi)?

I’d love to say that she rented the SUV to haul Thugboy’s self-storage crap back to her apartment, but in a story featured later on in this very volume, we see Emp and company replacing the SUV’s muffler. Four volumes hence, we see her parking the same auto en route to her part-time job cosplaying as herself. Other than those cameos, however, the car remains unseen. To wax Seinfeldian, what is the deal with this SUV?

One reason for neglecting Emp’s SUV: Too many traffic scenes might’ve hinted too clearly as to exactly which West Coast city the series calls home. A young college grad like Emp could probably skate by without owning a vehicle in, say, a public-transportation-heavy urban region like the San Francisco Bay Area—at least, I managed to live there sans voiture for a few years, so it can’t be all that difficult. I suspect this would be a dramatically bigger problem in most of So Cal, though.

Another, more concrete reason: I absolutely despise drawing cars, let alone streets and highways full of the damned things. Plus, as this page shows, I find that car interiors limit my camera choices during conversation scenes, with head-and-shoulders shots and close-ups predominating the storytelling. (Note that I had to place the camera technically outside of the SUV for panel 4’s view of Thugboy and Emp.) Of course, an artist less literalistic and more creative than myself could probably work up more varied shot choices—but that’s an issue for another commentary.