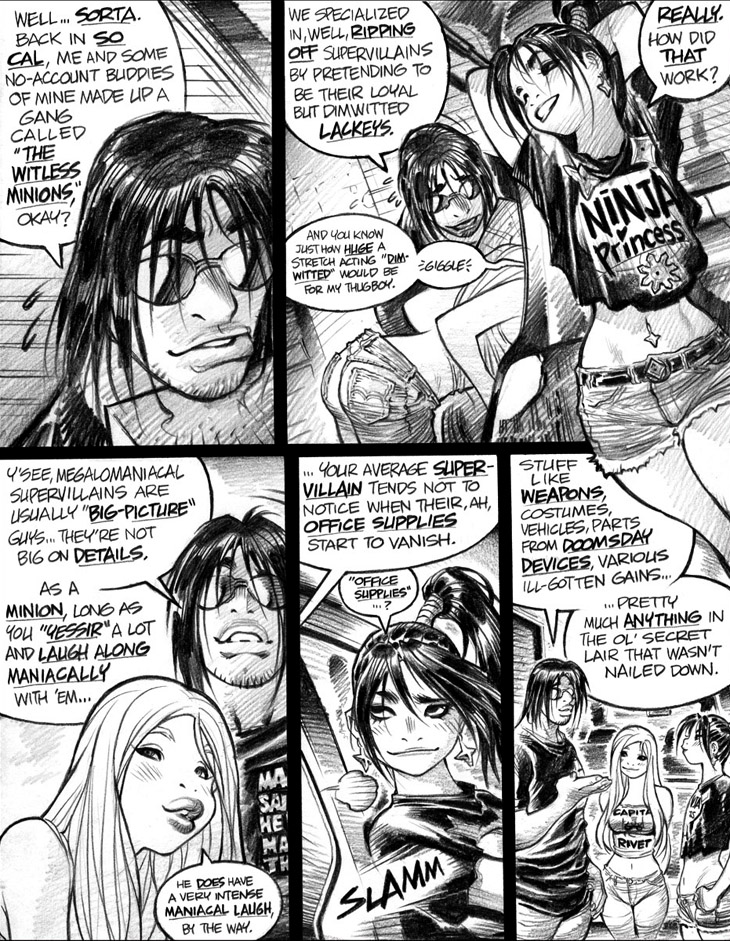 Panel 2 features yet another tossed-off, throwaway little detail that, over time, developed into an important plotline: that is, the “Ninja Princess” T-shirt that Ninjette is wearing. When I decided on a whim to draw her with said top, this was merely a theoretically humorous riff on my part… but, as I ruminated further over the implications of the term “Ninja Princess,” this visual joke evolved into a relatively serious, ongoing examination of the character’s increasingly troubled background. (As long-term readers of the series can attest, “troubled” is  a distinct understatement in terms of describing poor Ninjette’s backstory.)

Interesting, by the way, that this initial Ninjette riff—with all its ominous future implications yet to be conceived—should appear in a story that expands upon Thugboy’s own troubled background. In a not-dissimilar manner, his backstory sprang to life from a string of casual “What If?” questions I asked myself—“What if minions weren’t always mere lackeys, but might themselves be opportunistic criminals secretly exploiting hapless supervillains? And what if these scheming minions picked the wrong bad guy to victimize? What would be the worst possible supervillain for them to pick?” And lo, in the pages that follow, these questions spawned another long-running plotline.

Note also that, continuity-wise, the unselfconscious Ninjette would be entirely likely to wear a crop-top, as opposed to the considerably lower likelihood of deeply insecure Emp rocking panel 5’s “belly shirt.” Oh, well. (Then again, Emp circa Empowered vol. 1 had a rather notably flatter belly than she does in current continuity, in which I’ve elected to draw her a bit softer and fuller-figured in a wan and belated attempt to help differentiate her body from, say, Ninjette’s athletic physique or Sistah Spooky’s magic-sculpted frame.)