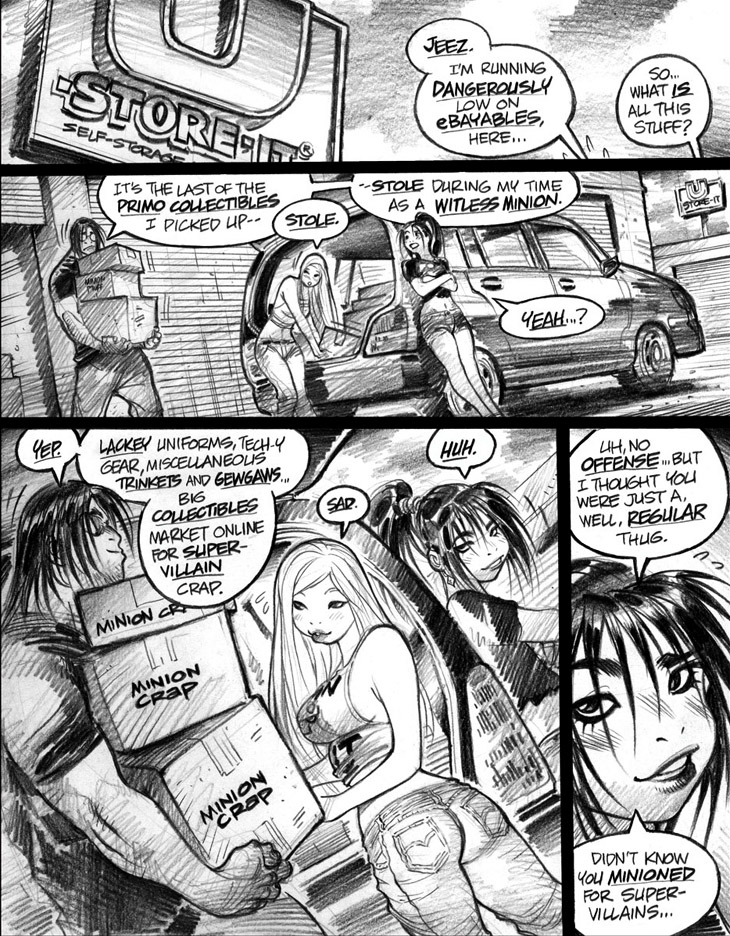 Panels 2 and 3: The midriff-exposing "belly shirt" and low-riding jeans that Emp sports here do, in retrospect, seem a bit of a stretch for someone with our heroine's pronounced set of body-image issues.  (Then again, it's entirely possible that I hadn't devoted quite as much attention to those issues during this early period in the development of Empowered.) On the other hand, if I recall correctly—which, I admit, is a dubious proposition—belly shirts and low-riders were still a thing circa 2005-6, and Emp might well have reluctantly knuckled under to the fashions of the era.

Note also that the belt Emp is wearing with her jeans in panel 2 disappears mysteriously in panel 3, never to be seen again in the story.  This minor continuity glitch, I'm afraid, is an unfortunately common side effect of my working technique.  See, given the soft and extremely smudge-prone pencils I use to draw Empowered, I have to mask off every other panel—save for the one I'm currently working on—with copy paper, to keep the rest of the page clean.  The problem: Unless I use transparent tracing paper to mask the earlier panels—a rather expensive proposition, alas—I can't look back and see what I drew previously, which occasionally leads to continuity errors such as poor Emp's disappearing belt.

A bit of the ol' "brokeback pose" to the figure drawing of Emp in panel 3, given that both her chest and her behind are visible from 3/4 angles—a view that is not quite as anatomically impossible as some believe, but certainly not a pose that would be arrived at casually.  In fact, I'm reasonably certain by the positioning of Emp's left arm that I was making an "in-joke" reference to what I've dubbed "the Mother of All Manga Brokeback Poses"—a panel from Shirow Masamune's 1991 manga Orion, in which anti-heroine Setsuna appears in just such a wackily distorted posture.  In my apparent '91-era naïveté, I'd never noticed that particular pose before—or, at least, seen it so blatantly featured, with such an obvious "out" to conceal the lower-back twisting it would require.  That is, Shirow uses the cloth bundled at Setsuna's waist to obscure the torsion folds that a more realistic approach to the pose would induce in her flesh, as seen below:

Must admit, for years that Orion panel cracked me up for both its "fan-service" goofiness and its evasion of figure-drawing difficulty—and, I believe, Emp's pose here is a tribute of sorts to that image, notably including the use of her left arm to conveniently conceal the necessary twisting of her torso. (Or perhaps not, as the motivations of 2005-Era Me are not always clear to Present-Day Me.)