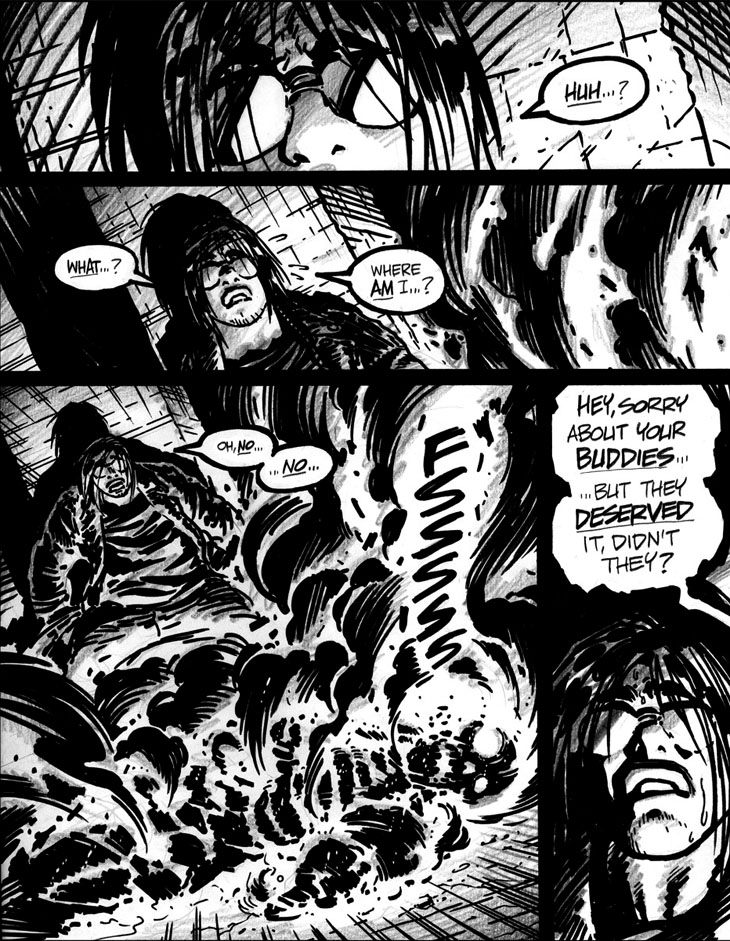 Ah, here's the first of my sporadic Empowered forays into artwork from with my beloved—if often fume-intensive—Sharpie® markers. For a figuratively dark and nightmarish story, figured I might as well get literally dark with the storytelling medium I was using. I use Sharpies® for most of my layout pages on writing-only comics jobs, and quite enjoy 'em for high-contrast rendering schemes like the one seen on this page. Working with markers also happens to be much less stressful on my often-ailing drawing hand than the leadholder pencils I normally use, which is a nice bonus.

If I recall correctly, I briefly switched to this mixed Sharpies®-and-pencils medium because I’d  gotten a kick out of the overly tight layouts I was producing for the 2004 Marvel miniseries Livewires and 2005's Iron Man: Hypervelocity. (I’d try to attach one such layout below, but the decade-old jpegs for those roughs don't seem to play well with this site's software.) Anyhoo, I quite enjoyed the flexibility of this marker-based approach, which was almost as much fun—and, importantly, as fast to produce—as the stripped-down pencil technique I was using on Empowered. So, I was happy to briefly revisit the technique for this figuratively and literally dark little story.

Ah, poor Livewires. Poor, long-out-of-print Livewires. I’ll have to address that ill-fated project in more detail in a later commentary, as it’s tangentially important to the genesis of Empowered. (Er, unless I already addressed the miniseries in a previous commentary; after 150 or so of these suckers, I find it difficult to recall precisely what ground I’ve covered.)