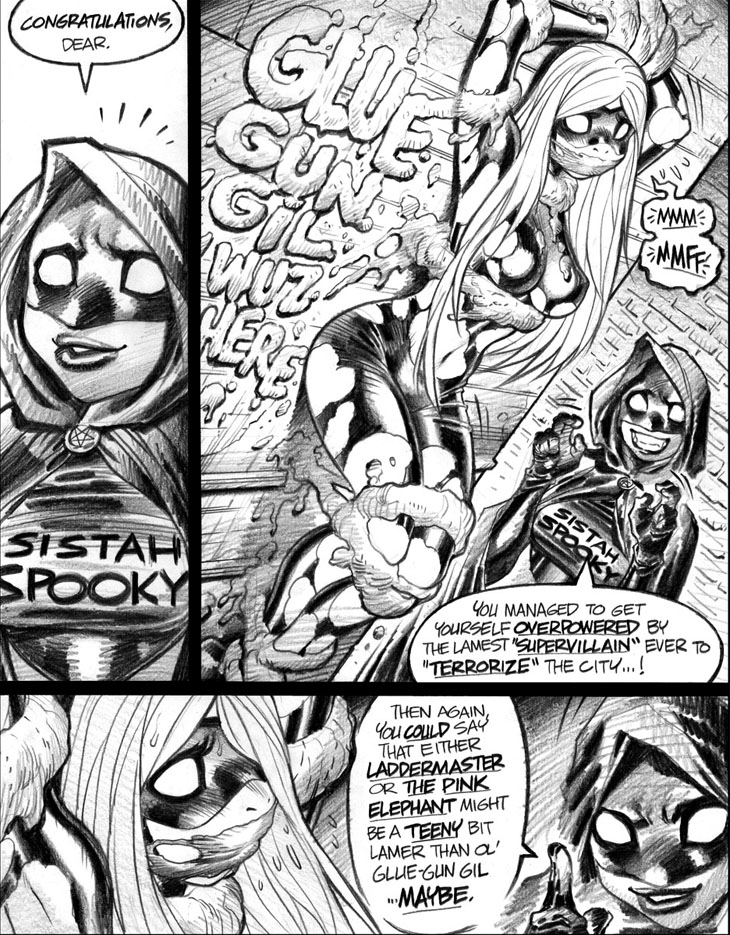 Must admit, the logistics of precisely how Glue Gun Gil managed to paste Emp so high up on that wall in panel 2 do seem a tad complicated. Perhaps another, supersized villain held her up against the wall, and—well, maybe not, as the point of this scene is that Emp was victimized, presumably solely, by one of the lamest supervillains in the notably lameness-intensive Empverse. Hmmm… mysterious! Well, readers, welcome to the Empowered world of what I call “elliptical storytelling,” in which we jump right in and out of scenes without sweating the exact details of how that scene arose. Of course, what I’ve euphemistically dubbed “elliptical” may be characterized as “lazy” by readers ready to pounce on apparent errors. God—or the Caged Demonwolf, perhaps—knows that, as a lifelong geek, I’m prone to such incessant nitpickery and Jesuitical “rule-lawyering” myself.

This issue always poses tension with comics’ often limited pagecount, though. Do I burn precious panels—or entire pages, even—carefully explaining a tangential plot element solely to fend off later nitpicking criticism? Sometimes seeming errors or omissions in stories really do have explanations, but you don’t have the luxury of extra space or time to adequately address them. On the other hand, sometimes no such explanations exist, as the storyteller is heedlessly flying by the seat of his or her pants. Wheeeee!