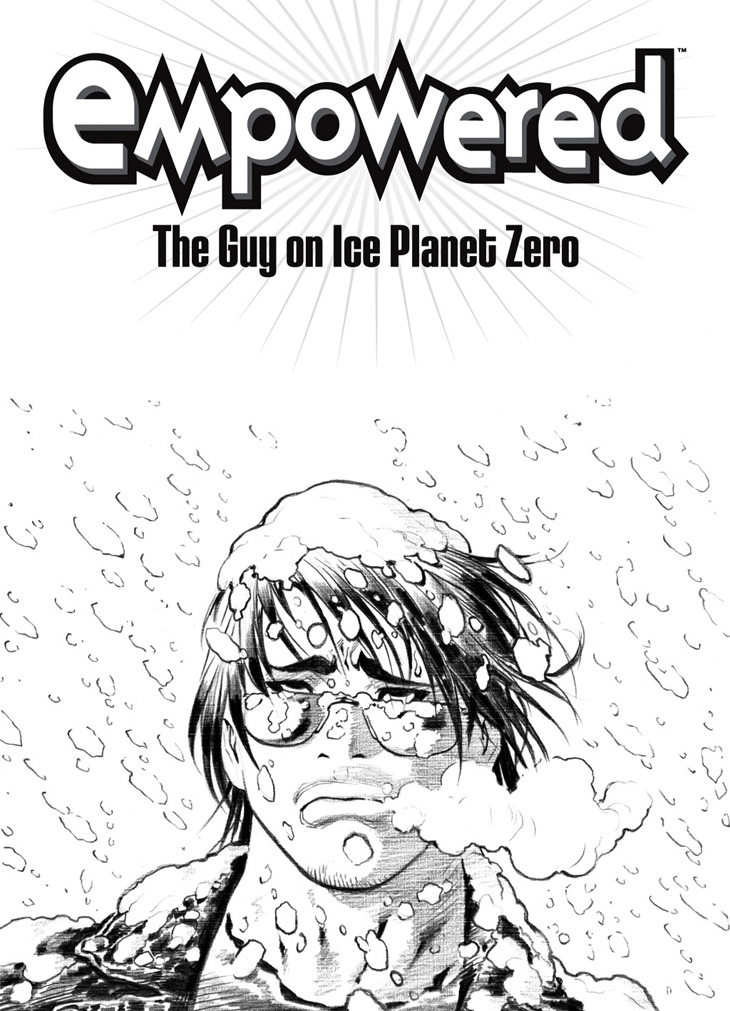 For the uninitiated, this story's title is a none-too-subtle reference to the episode "The Gun On Ice Planet Zero" from the original, 1978-79 Battlestar Galactica TV series. (A.k.a. "The episode that was fairly blatantly The Guns of Navarone crossed with The Dirty Dozen, but in space. Well, in the snow, actually. Plus, a really cool, gold-suited Cylon named Vulpa ran the enemy operation; I kinda ripped him off for an incredibly crappy story I wrote in the 5th grade.”) Furthermore, to cut off any potential complaints from aging nitpickers, I should probably hasten to add that “The Gun on Ice Planet Zero” was, of course, a two-part Galactica installment, so my earlier reference to “episode,” singular, was technically off-base. Sorry ’bout that, fellow elderly dudes.

Minor art-critique time! On these chapter-break pages, I always leave the top third of the original artwork blank and open, to leave space for the story title and Empowered logo—and also the “starburst” of subtle grey lines radiating outward from the latter. Here, though, I’d say that 2006-Era Me was overcautious in keeping that upper portion of the page open, to the point that one can very clearly see the demarcation where I stopped drawing the background’s blobs of flying snow. A better approach would’ve been to either draw a few snowflakes in the “dead zone” above, or to do a better job of vertically “gradating” the amount of snowfall from top to bottom. (Oh, well.)

Note that this title page is a callback to the introductory illustration from the earlier story “Willy Pete,” in which a hapless Thugboy faced a fiery and hellish off-panel fate. Here, a hapless Thugboy instead faces a frigid and hellish off-panel fate in the aftermath of his nasty fight with Emp. The main difference between the two images? The “Willy Pete” close-up of Thugboy was a pretty decent illo, whereas this one kinda sucks, I’m afraid. (Can’t win ’em all, 2006-Era Me.) Much later on in the series, I revisited this layout for a different—and artistically superior—title-page drawing of “Thugboy in the cold”; I’ll try attaching it below. Here goes:

Much better, don't you think?