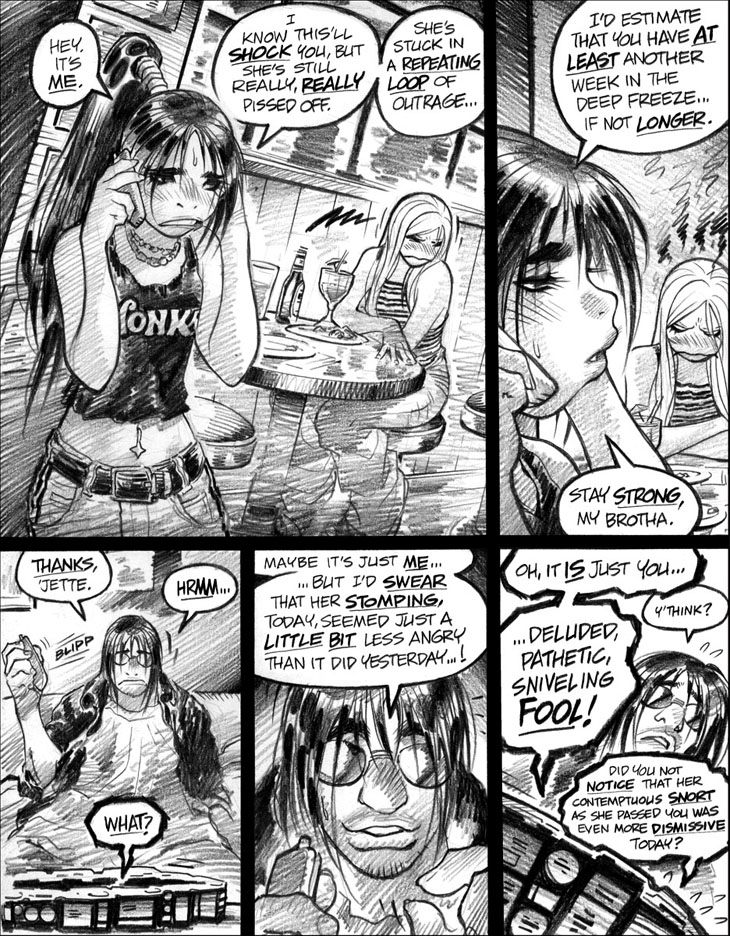 Note that the vaguely Applebees-esque chain restaurant depicted in panels 1 and 2 is supposed to be the same one visited by Ninjette and Emp way back on the night they first met, as seen in the earlier story “Good Girls.”

Some peculiar sartorial choices in panel 1, I gotta say. Ninjette’s Wonka shirt is certainly an odd choice, probably ported directly from the pages of a Target ad insert or one of the arguably “hipster-ish" fashion catalogs I had kicking around at the time. Her side-striped low-riders—and that unusually wide belt holding ’em up—definitely hailed from photoref as well, as I doubt I’d have drawn such an ensemble off the top of my head. More mystifying still, however, are the very large and very, very baggy pants worn by Emp in the background, which seem so billowing and voluminous that they make me think of 90s-era fashions. Makes me wonder, how the hell old was the catalog or ad I cribbed them from? Then again, I wouldn’t have been dumb enough to use reference that was that far out of date. Wait, I’m pretty sure I was still reffing from an assortment of semi-recent dELiA or Wet Seal catalogs (or the like) at this point; were baggy pants still a thing in the early- to mid-2000s? I honestly can’t recall.

As I’ve said before, despite appearances to the contrary, I don’t really have a problem with drawing Emp or Ninjette out of costume and in regular clothes. The real reason why you rarely see that in Empowered is because, while drawing “civilian clothes” is no problem, the civilian settings in which I’d have to draw the characters would be a very big problem for me. Urban exterior shots—and, worse, urban interior shots—are vastly more difficult for me than depicting the “noodliest” and most detail-intensive of ultra-tech backgrounds. I didn’t break a sweat at rendering, say, a roiling sea of grotesque alien “cancerflesh” in Empowered vol. 9—but I would get very sweaty indeed if you asked me to draw a nice, clear establishing shot of a classroom. (Those g-d desks and chair legs and figures, all in complicated relational perspective… Ughh!)

That’s one of the key advantages of writing my own comics: I can steer the stories away from settings and backgrounds that are excessively difficult to draw. Even so, at times Writer Me can get way, waaaay too confident about what Artist Me can handle, especially after I’ve spent too much time reading the work of comic artists with skills far beyond my own. “Why, sure, an Air Gear-style double-page-spread sounds like a great idea!” (Hey, calm the f**k down, Writer Me.)