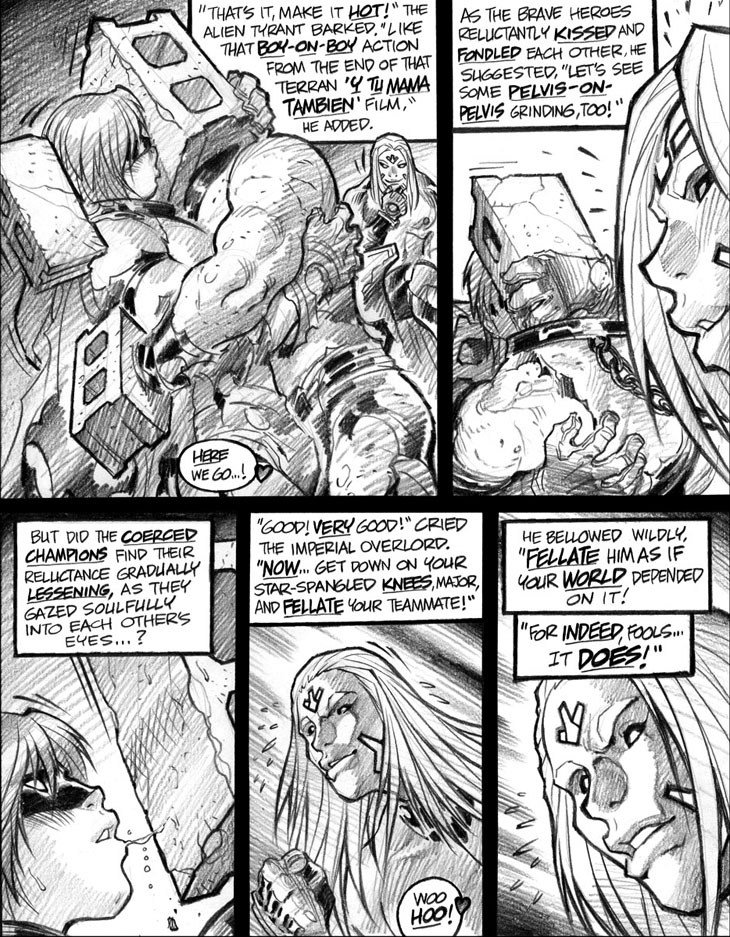 I’m not sure that panel 1’s reference to director Alfonso (Gravity, Children of Men) Cuarón’s 2001 film Y Tu Mama También has held up all that gracefully in the last decade or so, but I’d be loath to change it, even if I had a mind to do so. (Which I don’t, as Empowered is all about embracing imperfection, folks.) See, when I first mentioned this story to an artist friend of mine as I was working on it, she immediately declared, “You have to include a callback to Y Tu Mama También,” with a fierceness and resolve that would not be brooked. Clearly, the, uh, climactic guy-on-guy makeout session from the end of that movie had stirred her to the very core (ahem). Thus, I’d hate to disappoint my friend by pasting in a more contemporary pop-culture reference in a misguided stab at increasing relevance. Then again, as I’ve said before, if I ever even dared to consider tweaking or “improving” these old stories, I’d get bogged down in nitpicking and corrective minutiae almost immediately. Finding time just to post and comment on these pages while still writing and drawing new Empowered stories on a full-time basis is already challenging enough without yielding to the siren’s song of “fixing up” old work.

Possibly the greatest line from this entire volume, in my humble opinion: “Now… get down on your star-spangled knees, Major, and fellate your teammate!” You won’t get quality dialogue like that in your average Marvel or DC comic, folks. Or will you, nowadays? Must admit, I don’t keep up with more than a handful of Big Two books at the present, so the preceding statement might be a tad off-base.

Stand by, new readers! If you haven’t yet figured out what this story is all about, and what its title—“The OTHER F-Word”—is referring to, you may rest easy, as all will be revealed on the very next page.