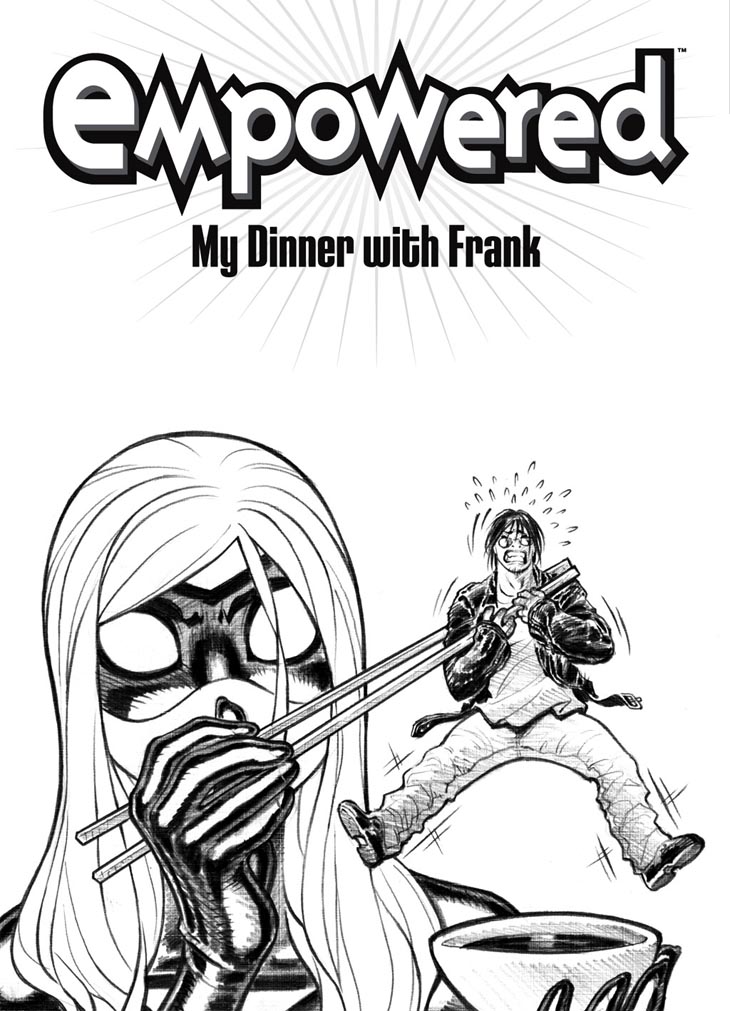 Brace yourself yourselves, folks, for another of my patented, old-style Empowered vol. 1 specialties: a title-page illustration that, in effect, is half as long as the dinky 2-page story that it introduces! Huzzah! Or, perhaps more relevantly: Sigh. While I have rather enjoyed looking back over the last 200-odd pages of early, “rough draft” Empowered, I can’t say that I particularly miss the truncated format of this volume’s handful of super-short stories. As I’ve noted before, nowadays such a teeny-tiny anecdote would be woven into a longer story as just a brief scene, rather than devoting an actual chapter to it.

Readers Of A Certain Age will, of course, recognize that this story’s title is an oblique reference to the acclaimed 1981 film My Dinner with Andre. (For the record, I’d completely forgotten about this reference until roughly 1.5 minutes ago. Whoops!) For a good decade or so of my life, My Dinner was the default cultural example of a high-minded, intellectually challenging movie, as in, “Jeez, guys, every movie doesn’t have to be My Dinner with Andre.” Yes, folks, back in the 80s we hadn’t yet fully refined the idiotic trope of “Actually a pretty good movie, if you turn your brain off when you enter the theater.” Oh, how I despise that moronic g-d sentiment—and I despise that view a thousand times more whenever it’s expressed by an alleged writer or artist. No one in a creative field should ever trot out that mewling excuse for narrative laziness and sloppiness and condescending, unambitious, lowest-common-denominator (lack of) thinking. Even the silliest, goofiest, most undemanding work—such as the comic you’re now reading, perhaps?—can and should still be competently carried out with thought and care and respect for the g-d audience. If, as a creator, you feel otherwise, then you, sir, are a miserable hack. Congratulations! Now, get the hell out of whatever creative field in which your worthless behind happens to take up space.

Speaking of this title, for the benefit of long-term Empowered readers, here’s something that just now occurred to me: Remember the vol. 5 story “My Idea of a Team-Up,” in which several supervillains propose to join forces for a mission? I obviously should’ve titled that story “My Dinner with Willy Pete.” No, wait, that wouldn’t have worked, as the presence of ol’ Willy Pete was, in fact, supposed to be a surprise. Okay, never mind, long-term Empowered readers.