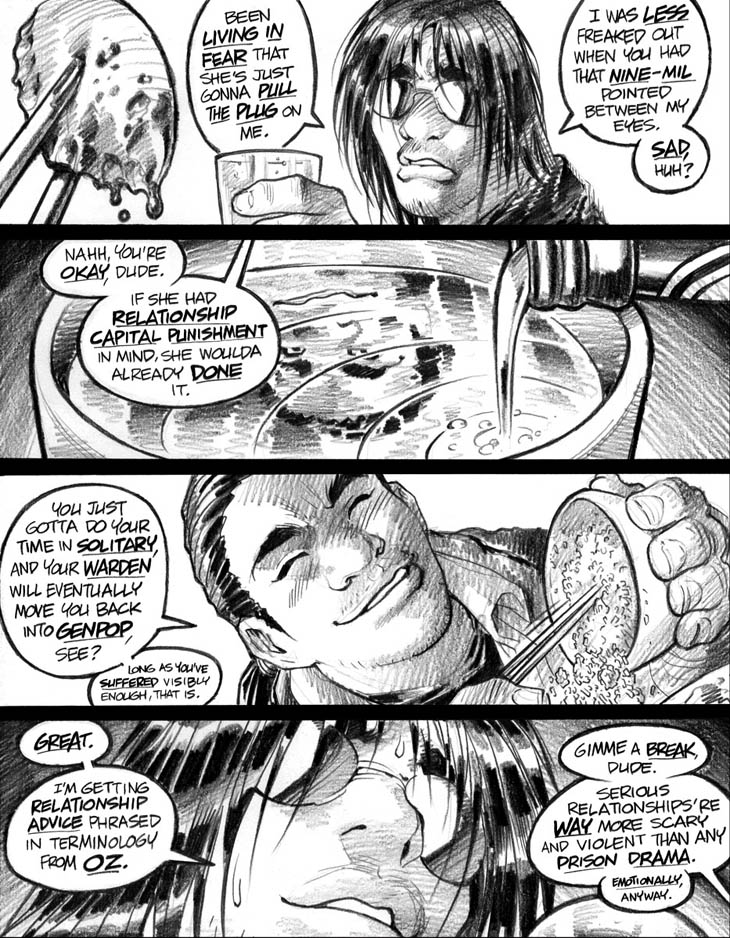 Mmm, that’s a delicious potsticker close-up in panel 1, 2006-Era Me. Well done! In fact, I’m happy to say that some potstickers will be definitely be in store for dinner tonight after I finish this commentary and get off the treadmill. For the record, I peck out these commentaries on an improvised “treadmill table” in order to tackle both my cardio and webcomic work simultaneously. I strongly recommend the time-saving (and, theoretically at least, health-saving) concept, by the way; I sincerely doubt that these incessantly rambling commentaries would’ve been possible, otherwise.

An artsy approach in panel 2: Frank, blurrily reflected in the ripply surface of a glassful of Chinese Tsingtao beer. An irrelevant yet wordcount-building aside: Tsingtao is probably the only beer in a green bottle that I ever deign to drink, possibly due to positive associations with hitting up Panda Inn at the San Diego Comic-Con back in the fabled day. Normally I have to steer clear of green-bottled beer, alas, due to overwhelmingly negative associations with a surprisingly traumatic teen-era incident involving the drinking of blood-warm Heineken. (Let’s just say that, as I was puking up the Heinies, I became aware that their temperature had remained wholly unchanged during the entire drinking-then-vomiting process. Eww.) To this day, decades later, just the sight of beer in a green bottle makes my skin crawl a little. Too Much Information, huh? Well, sorry, folks, as not much else sprang to mind when I glanced over this old Empowered page.

Panel 4: Ah, yes, a reference to the HBO prison drama Oz, arguably the herald to the metaphorical Galactus of the more prestigious and acclaimed HBO series that followed it, such as The Sopranos and Deadwood and—of course, best of all—The Wire. Good ol’ Oz had just finished its run in 2003, three years before I wrote this story, so this was still an arguably relevant pop-cultural reference at the time. I suspect, sadly, that a decade later, the currency of an Oz callback may be tragically devalued. Then again, I’ve recently spoke to people who only know HBO as “the Game of Thrones guys,” with even the sainted Wire and Sopranos being hopelessly and bafflingly obscure references to them. Oh, well.