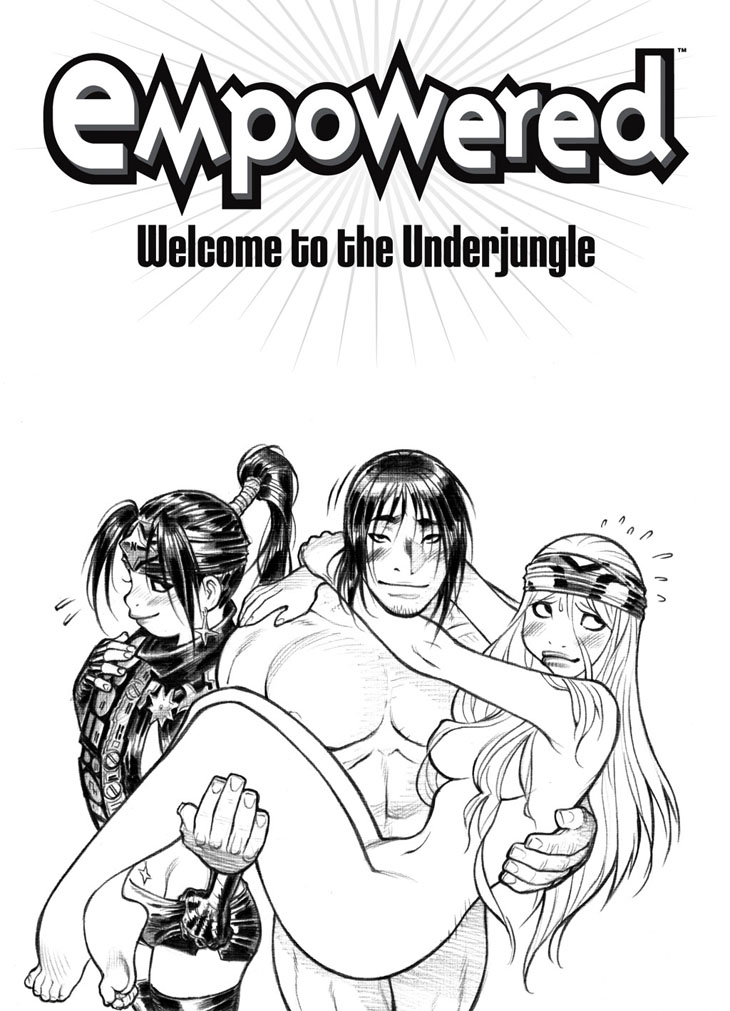 At a con, somebody did ask me, “Shouldn’t we see Thugboy’s pee-pee hanging down in this illo?” (For the record, I swear on the life of this series—I’ve no children’s heads to swear on, alas—that the admittedly technical anatomical term “pee pee” was used.) I had to delicately explain to the questioner that pee-pees do not always hang straight downward and indeed can, under certain circumstances, assume more vertical orientations. That being said, Thugboy’s unseen pee-pee might well be assuming a rather rakish diagonal orientation to remain out of view in this image.

In my naturally unbiased opinion, whatever its Thugboy-related flaws might be, this is one of the better chapter-break illos in all of Empowered vol. 1. Good thing that I saved the best for (almost) last, given that this is the penultimate title page in the book. After a cursory glance at the dog-eared print copy I use as reference, I can tell you that only another 20-odd pages are left in this volume’s webcomic serialization before we roll on into the majesty of Empowered vol. 2. Hoped you’ve enjoyed the experience so far, new readers!

As I write this commentary, I’m running only about a week or so ahead of the webcomic’s posting. Once upon a time, I was months ahead on cranking out these commentaries, but that formerly plump cushion of lead time has dwindled away to only a few days as my many other responsibilities have winnowed down my time for such indulgences. I remain committed to posting commentaries for all the Empowered vol. 1 webcomic pages, but may have to restrict the yammering to only a modest paragraph or two per page going forward, as opposed to the notably more sprawling and epic rants of recent posts.

I suppose I really should ask, are you folks still getting anything out of these commentaries? Sure hope so! I’ve enjoyed writing the pieces, but carving out the time to work on ‘em is growing ever more difficult of late, even with the ol’ treadmill desk helping out. I’m ramping up work on Empowered vols.10 and 11 (back-to-back!) and several other other Emp projects in preparation for 2017, the 10-year anniversary of the series, a year which might prove to be a make-or-break point for Empowered as a whole. As such, pains me to say that the bloviated blithering and blathering of these commentaries might have to be cut back a fair bit, in the hopes of devoting a little more time to future Empowered projects—and a little less to looking back at the series’ past.