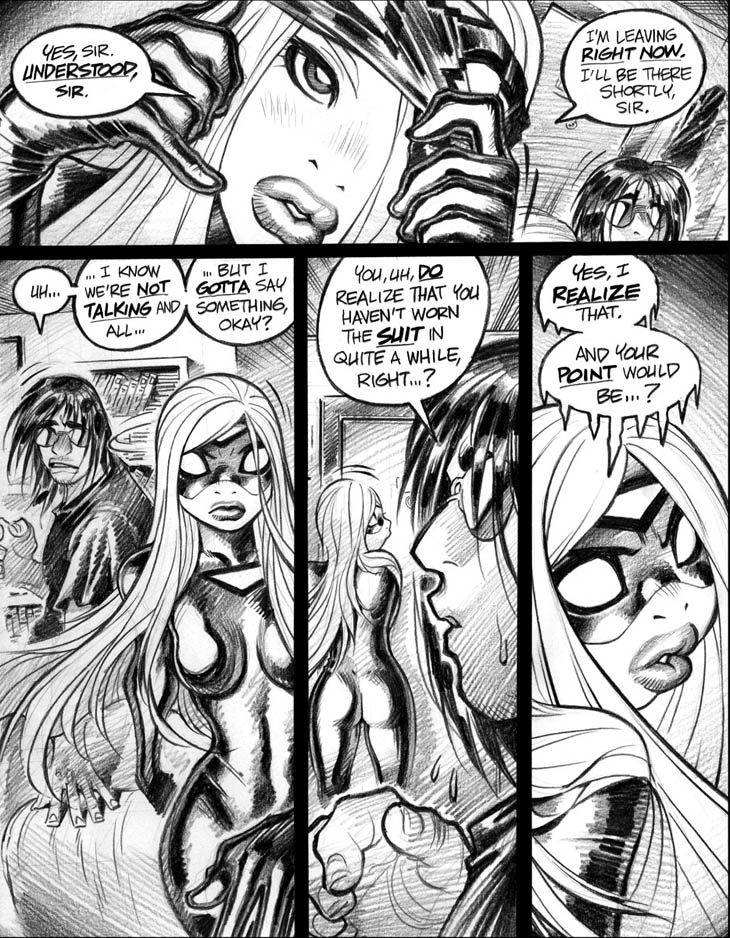 Panel 1: Behold, an early—possibly, the earliest—appearance of an Empowered superhero making the thumb-and-pinkie “telephone” gesture as an indication that unearthly powers of some sort are being used for communication purposes. Here, I trotted out the riff to get around the problematic issue of how Supersuit-Clad Emp stays in touch with anyone, given that her far-from-Liefeldian costume—that is, devoid of pockets or pouches—prevents her from carrying around a cell phone. (I once had the idea that Emp did previously try to bring a phone along whilst patrolling—on a necklace chain or lanyard or the like—but it was destroyed in the course of action so many times that she had to discontinue the practice.) Besides, the last g-d thing I wanted to show was a superheroine wasting her time like the rest of us mortal schmoes—that is, constantly staring down at her frickin’ phone all day.

Behold also the odd illusion of how Emp’s mask, rolled up in panel 1 like a headband, can transition from wrapped around her hair to suddenly underneath her hair once she pulls it down. As I’ve said before, this peculiar, admittedly inexplicable riff is a holdover from the freewheeling, tossed-off, “DGAF” days of early Empowered, when I cared not a whit about possible explanations for such visual shortcuts. (That that I care all that much about such issues nowadays, but I definitely cared much, much less at the series’ start.) As such, I’ve retained the mask’s mysterious “rolldown” powers as a fond callback to more carefree days.

Panel 3: According to conventional ideas about the oft-touted “180° rule,” I probably should’ve flopped this panel’s artwork so that Thugboy’s foreground profile would be on the left and Emp on the right, to preserve the previous panel’s character order. On the other hand, I’m a bit dubious regarding the 180° rule’s relevance to the comics medium, as opposed to its original application in film and/or TV storytelling. (Far more critical, I feel, to make damn sure that the second person speaking in a comics panel is on the right, lest one receive a terrifying visit from the dreaded, comics-ruining specter of word balloons with crossing tails.) In any event, I don’t think an application of the ol’ 180° rule in this panel would’ve made much—or, possibly, any—particular improvement to this page’s narrative flow.