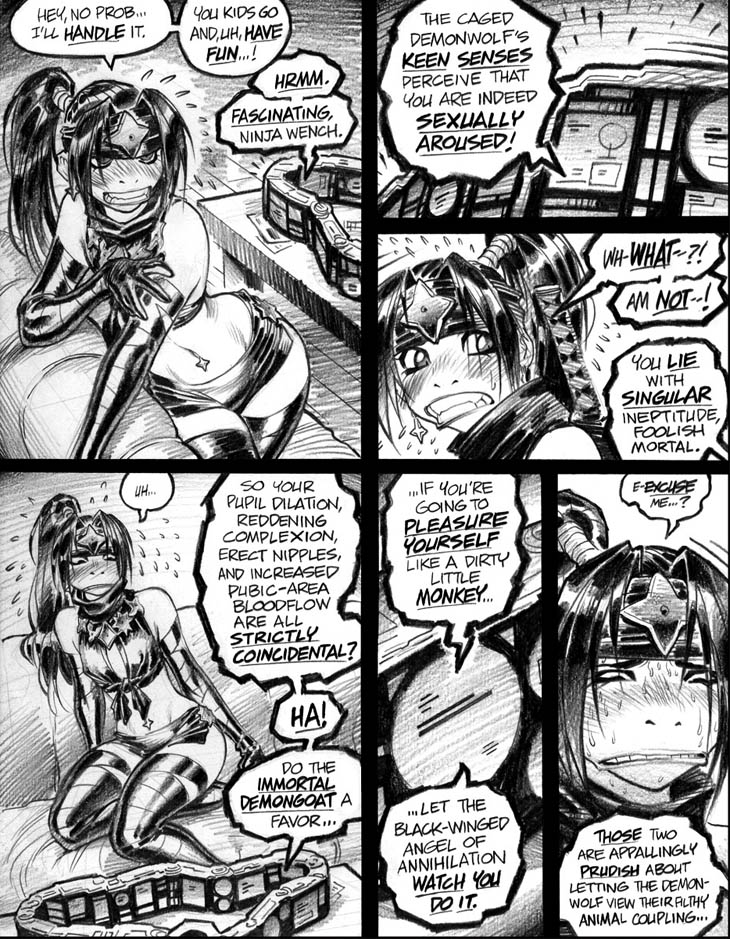 Panel 1: Nice hips on Ninjette in this shot, 2006-Era Me! As I’ve said before, the oft-mentioned Mysteriously Intermittent Post-Millennial Torso Glitch probably developed in an overstylized attempt to mess with female characters’ waist sizes in order to exaggerate and emphasize the width of their hips. What can I say, folks? I like to draw ladies with, uh, “curvy” hip dimensions.

One of my favorite comic artist’s preferred body type for his “sessy, sessy ladies” involves broad shoulders, huge boobs, and super-duper-narrow “boy hips,” a predilection which I have to admit mystifies me to no end. Well, “to each his—or her—own,” right? He’s clearly not doing this to pander to anyone, unless a heretofore unnoticed-by-me market for slim-hipped heroines with linebacker-width shoulders is flourishing out there. (While I don’t doubt that dudes strongly enthused by snake-hipped ladies certainly do exist, they don’t seem to be a major demographic I’ve ever encountered. Then again, perhaps I am profoundly mistaken on this point, given that many if not most fashion models’ hips are so skinny that they live in mortal peril of falling through subway grates…)

This page features what is probably the first scene in which the Caged Demonwolf gets, shall we say, inappropriate with Ninjette. Further down the road in Empowered, their weird little relationship becomes considerably more intimate, gradually and incrementally developing into one of the series’ more oddly compelling story arcs. This was completely unplanned, by the way, and is yet another fruit of the organic and freeflowing creative process this format allows me. Gotta say, almost charming to see Ninjette embarrassed and flustered by the Sin-Sensing Celestial’s sexually charged blather, given how differently she behaves around him in future volumes…