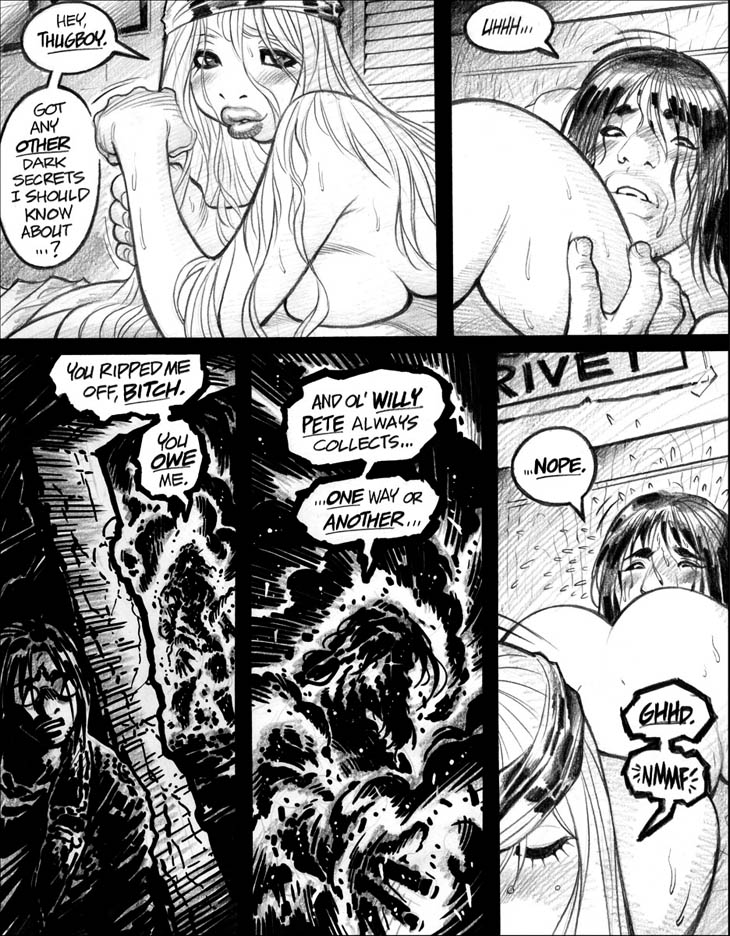 Panel 1: Sure, those are some Big Pouty Lips on Emp—and a Big, Squooshy Boob, as well—but I’m raising an eyebrow more at her unusually large hands. No question in my mind that I didn’t deign to rule out any figure proportions ahead of time, here. Nor did I take the time to draw out her full figure on a separate piece of paper, which is often a good—if time-consuming—idea for “cut-off” shots like this in which we only see part of a character’s body.

Note the problematic near-tangency—okay, “near-tangency” is a rather oxymoronic choice of phrase—between panels 1 and 2, where the lower line of Emp’s torso at the right edge of panel 1 almost but not quite lines up with the curve of her hip in panel 2, separated only by the black gutter between panels. Always a good idea to avoid having key lines from one panel accidentally align with key lines in the adjoining panel and, thus, accidentally spawn a distracting mess. These two panels come very close to doing so, though I suspect this is more noticeable to my eyes than it would be for most readers. Still, best to steer well clear of any hint of such a possible tangency. (For a quick primer on the many perils of tangencies in comic art, check this fine walkthrough here.)

Panel 4: Nice—if rather Rob-Zombie-looking—shot of ol’ Willy Pete here, with a rather different approach than I used for his fiery, flowing hair and beard in his later appearances.

So. This is the final page of the next to last—nay, penultimate!—story in Empowered vol. 1. After this, another 11 or so pages of epilogue ensue—narrated by the Blazing-Eyed Devilgoat, no less! Guess I’d best start rustling up the digital files for Empowered vol. 2, shouldn’t I?