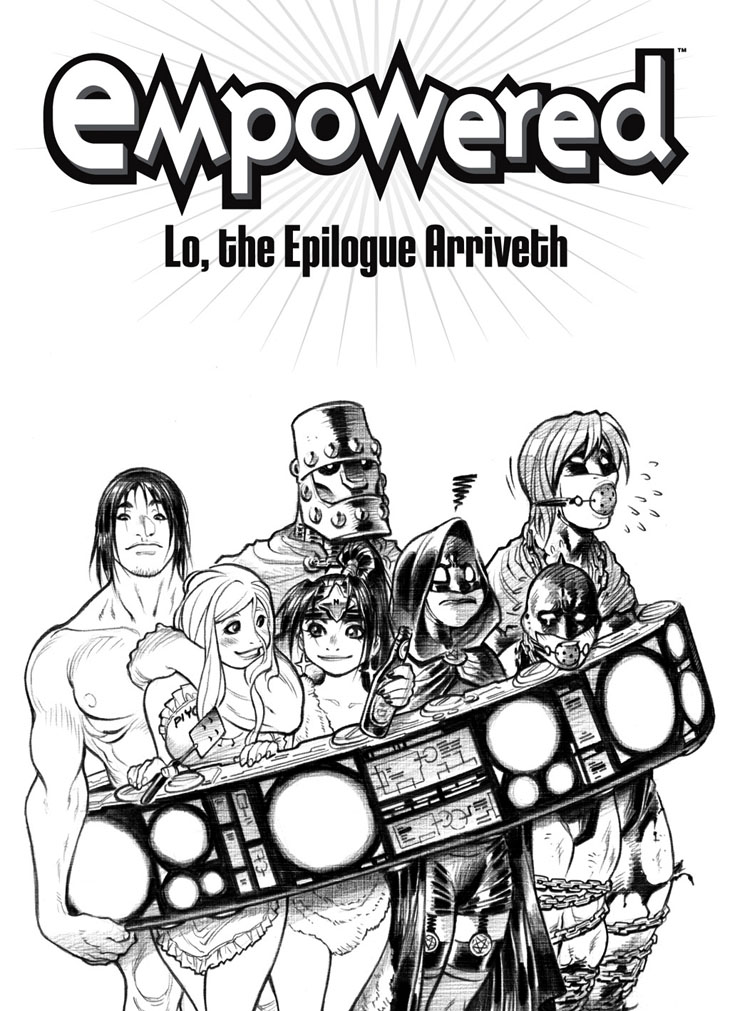 Behold, what may be the closest I’ve ever come to drawing a proper height comparison chart for the series. Emp and Ninjette being about the same height seems valid, though Sistah Spooky should be notably taller; her magically enhanced body would very likely have been taller than Emp to begin with, but would appear considerably more so when she’s wearing her platform shoes. Not a bad call on Major Havoc, as he really should be a strapping buck—though, for the benefit of long-time Empowered readers, he shouldn’t be as tall as Strapping Buck, the towering Superdead animalcape. Gotta say, though, that’s a much shorter Capitan Rivet than I’ve drawn subsequently.

Brace yourself for an epilogue chapter narrated by the All-Seeing Sovereign, the Nigh-Omniscient Overking, the All-Knowing Autarch, the one and only Caged Demonwolf! The title of this story does puzzle me a little bit, as the “Arriveth” flourish of pseudo-Elizabethan is not something common to the Blazing-Eyed Devilgoat’s grandiloquent speech patterns—though he does, of course, start many of his sentences with “Lo.” Nowadays, I might’ve rolled with something like, “Hark! The Valedictory Epilogue Does Surely Loom Nigh, Jackanapes!”

Enjoy this chapter’s variety of meaningless lights and displays and graphics on the outer shell of the xenotech cage that imprisons the Demonwolf as, during the next volume, the gears’ surface will become fixed to a very specific and unvarying set of images. In theory, the device’s outer shell is a single display surface that could show a dizzying range of such imagery, but over time I’ve elected to keep its graphics fairly consistent. (Might have to reconsider that idea, in fact.)