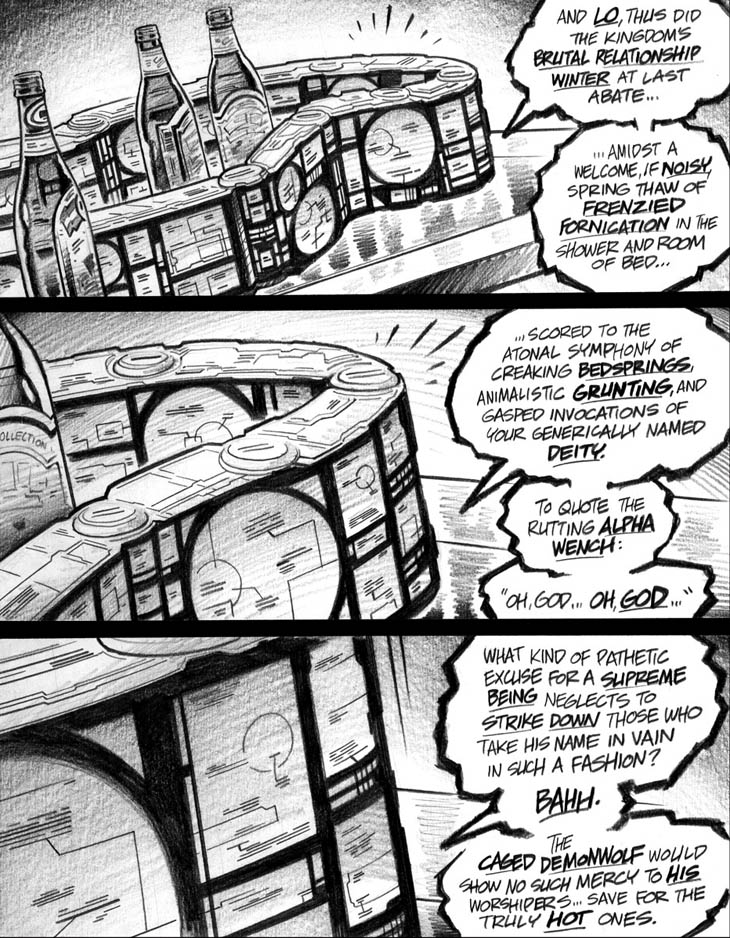 Gotta say, I kinda like the Caged Demonwolf’s speech patterns circa these first two volumes of the series, before I opened the Pandora’s box of alliteration abuse in a fateful story from Empowered vol. 3. After that point, I arguably went overboard—very far overboard—with thesaurus-straining, vigorously abstruse alliteration in the Blazing-Eyed Devilgoat’s rococo—if not outright fustian—dialogue in subsequent volumes. Definitely something to said in favor of this era’s more straightforward and less outrageously esoteric—but still bombastic!—speechifying by the All-Knowing Autarch.

Enjoy the noodly little “ultra-techy” details appearing on the displays that adorn the Demonwolf’s alien cage here, as they will soon vanish as of the next volume or so, ne’er to be seen again. Oh, well. Also, enjoy this “spread-out” version of the power-draining xenotech gear sprawling across Emp’s coffee table, for once I figure out in Empowered vol. 2 that the device could be folded in on itself for a more compact “footprint” on said table, we will never again see it in such a configuration.

Interesting that this page features a 3-panel progressive “zoom-in” on the Demonwolf’s alien cage, which could be considered a precursor to the 3-panel progressive zoom-in that I’ve been reusing repeatedly ever since its first appearance in Empowered vol. 3—though featuring different dialogue every time, of course. Though I believe I’ve posted this image on a previous occasion, below is the zoom-in to which I refer (and the previously mentioned "folded" form of the Demonwolf's prison):

Panel 3: I am aware that the Nigh-Omniscient Overlord is technically mistaken about the true meaning of the oft-misconstrued phrase “taking a deity’s name in vain,” but let us not evince the presumptuous effrontery of mere mortals by correcting an actual god—or god-like being, at least—about such matters.