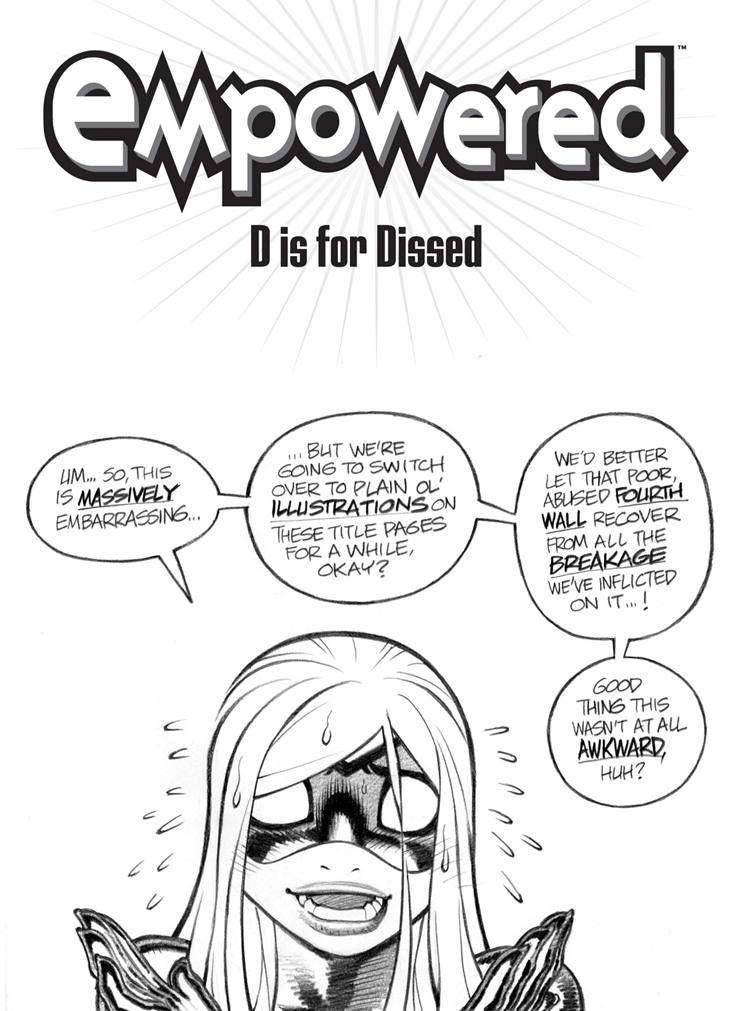 Aaaaaand this page marks the end of the “Metatextual Emp” format for the chapter-break pages, at least until page 100 or so. As I mentioned previously, Empowered vol. 1 featured so many short stories that I had to flounder around with varying approaches to these title pages to avoid boring myself with repetition.

Might as well use this not-otherwise-commentary-worthy page to talk about a random issue: Namely, my admittedly odd and idiosyncratic approach to lettering the series. I hand-letter its word balloons directly on the original art, a once-popular print-comic technique that has been almost entirely wiped out by the advent of computer lettering. (Or, more precisely, by the advent of all too often godawful computer lettering, but that’s a rant-worthy topic best saved for another commentary.) Modern artists do all the artwork for a given comic page first, then have the panels’ word balloons placed over the art in a separate lettering stage. This means that, poor, hapless, hardworking sods that they are, they produce a great deal of artwork that winds up being wholly obscured by the pages’ dialogue. My old-school approach, by contrast, saves me a great deal of worktime, as every word balloon I scrawl directly on the page is one more swath of background detail I won’t have to bother drawing. Advantage: Old school!

Even more peculiar is the fact that I letter Empowered almost entirely in pencil, just like the rest of the series’ artwork. Of the few remaining artists who still hand-letter—such as fellow Kubert School alum Steve Mannion (Fearless Dawn), who may be the best hand-letterer left in our field—all of ’em do so with ink, which is far more easily reproduced in print than pencil tones. Alas, unlike Steve’s fine work, my own ink-rendered lettering was always a mess, so I was more than happy to roll with pencil-based lettering.