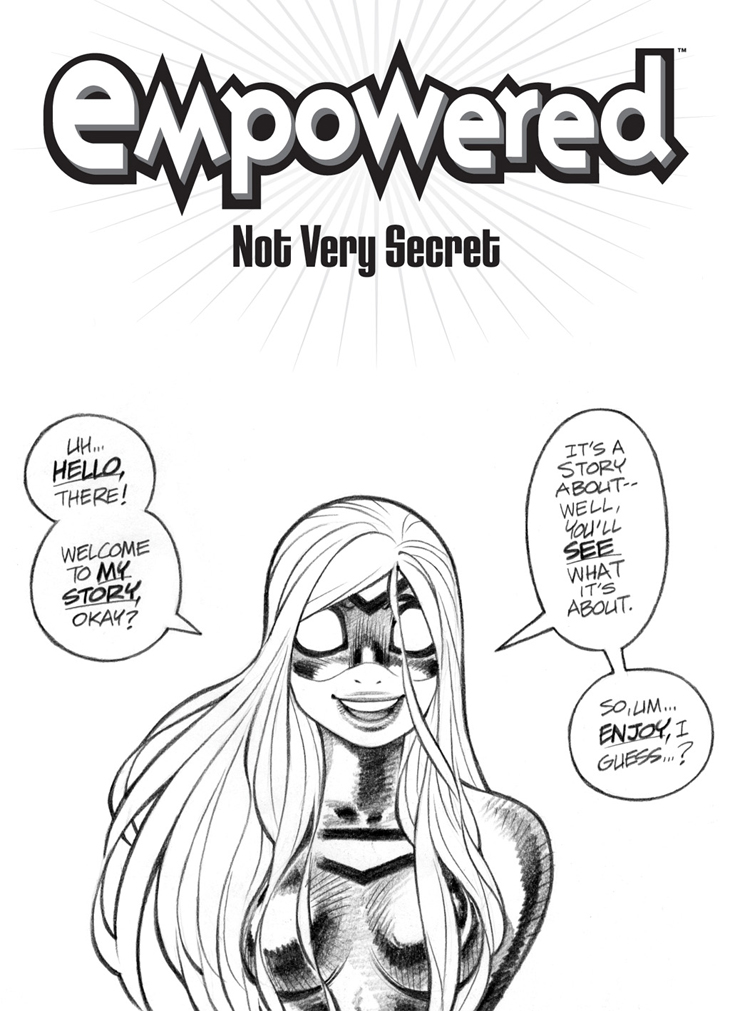 Welcome again to Empowered, new readers—and, in particular, welcome to the many, many title pages of Empowered vol. 1, which is broken up in to a series of (very) short stories.

Initially, I’d planned that every chapter in this first volume was going to start with a title-page illustration, in part as a tribute to the similar chapter-break practice used in manga paperbacks. (You’ll see this approach used to introduce upcoming stories later on in the series.) However, vol. 1 featured so very, very many short chapters that I grew to dread the prospect of having to do all those illustrations; in fact, Empowered only exists in the first place because I was bored with drawing commissioned sketches of distressed superdamsels, and started doing comics pages instead. So, I decided to roll with fourth-wall-breaking "metatextual Emp" pieces for some of the title pages, because A) dialogue interests me more than illustration; and B) this would, I hoped, add extra humor value to the book; and C) the "meta Emp" pages feature only an Emp headshot and a few word balloons, and hence are ridiculously easy to crank out in a hurry.

Note also that, after the earlier full-color cover illustration that kicked off our webcomic serialization, the rest of Empowered’s story pages will be in black and white—and pencil-based B&W, at that. Even more unusual, the artwork is pencilled on cheap ol’ garden-variety copy paper, as opposed to the swankier Bristol board that most comics are drawn on. Down the road, I’ll explore my reasons for this choice of medium in more detail; for now, I can tell you that cheap ol’ copy paper allows me a speed of production that’s leaps and bounds beyond anything I ever achieved with swankier Bristol board.