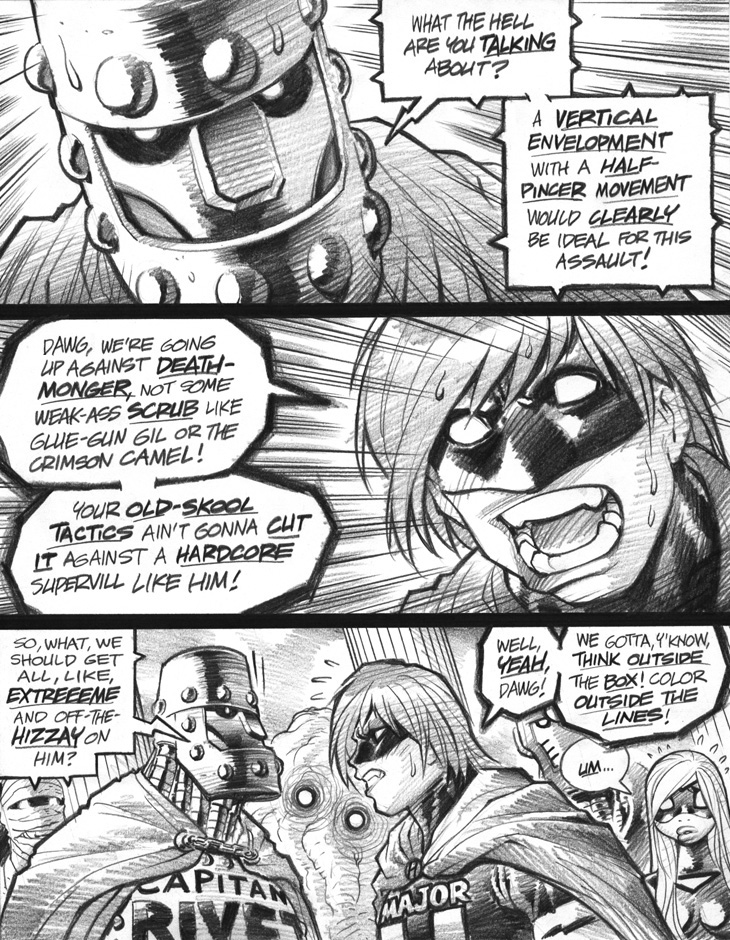 For readers of a certain vintage—that is, a somewhat aged vintage—panel 1’s “half-pincer movement” reference may seem a tad familiar, as this is a tactic often invoked—albeit vaguely—by George Peppard’s Hannibal Smith in the 80’s TV, uh, classic The A-Team.

Panel 2’s reference to the presumably badass supervillain Deathmonger does, in fact, pay off later on in Empowered—though, alas, much later, as in vol. 6, or roughly a thousand or so pages from now. I’m all about the long game, folks.

Panel 3 boasts more 80s-era “vintage reader” bait! Team leader Capitan Rivet is squaring off with teammate Major Havoc, whose “supranym” is indeed a reference to the obscure but semi-beloved Atari arcade videogame of the same name.

The background art—such as it is—for panel 3 amuses me to no end, as early Empowered is a very different comic than it is nowadays. Those vague pillars and hints of blue sky are pretty much the only indication we see of what the Superhomeys HQ might look like, as these first  Empowered pages were almost entirely devoid of anything even vaguely approaching a conventional establishing shot. At first, this project was nothing but a series of tossed-off, throwaway, consequence-free jokes, and thus I quite happily ditched all the exacting and time-consuming narrative techniques I had previously used on, ahem, “real” comics—with proper establishing shots being the first such technique to be thrown overboard. Goodbye and good riddance, establishing shots! (Alas, they would eventually return, and return with a vengeance, in later volumes.)