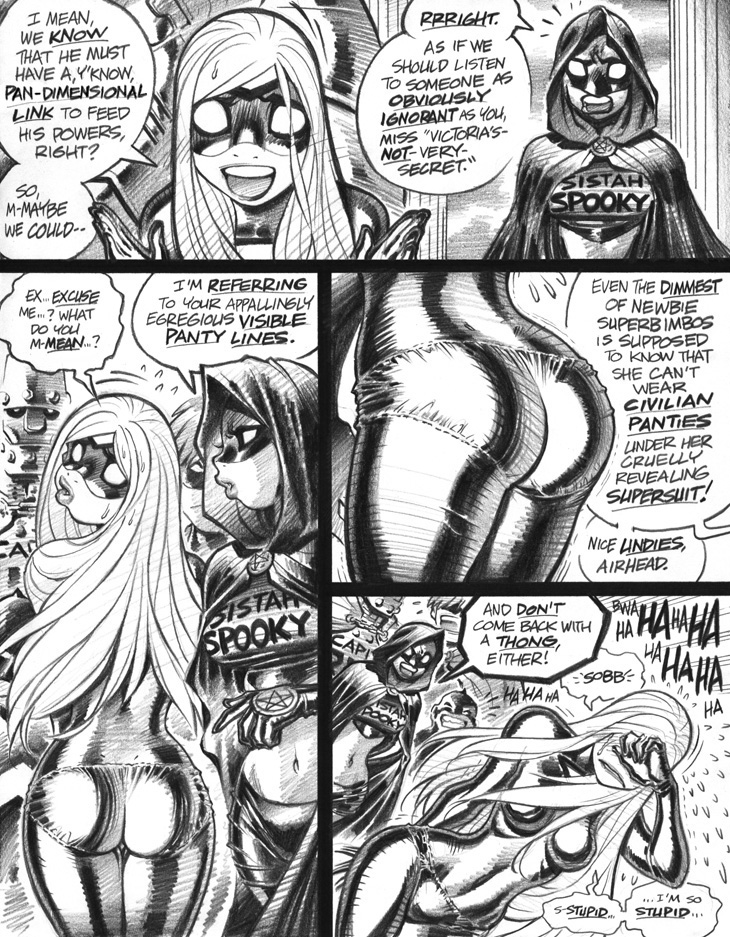 Up through page 100 or so, pretty much everything you see from vol. 1 is, in fact, a redrawn and vastly expanded version of Empowered's original incarnation, which was even more hasty and scrawled than these pages. In the earliest iterations, as with the similarly commissioned Dirty-Pair-in-distress "stories" that preceded Empowered, the pages hewed to the draconian maxim of "Every Shot Must Be Hot," meaning that a cute, presumably underdressed female would have to appear in every panel. The dudes who commissioned these pages weren’t interested in backgrounds and establishing shots, to put it mildly—and, by happy coincidence, I wasn’t terribly bothered by the prospect of not having to draw such less-than-thrilling material.

Needless to say, the "Every Shot Must Be Hot” format proved very limiting indeed once Empowered began to morph, mutate and evolve into something approaching a "real" comic, and was dropped entirely before long. By the time I redrew all the early stories (such as this one), the fan-servicing edict was naught but a memory. By the way, here's an artist friend's ultra-obscure description of “E.S.M.B.H": "Why, it's like an exploitative, cheesecake-based version of the Dogme 95 Manifesto!" (Protip: Check Wikipedia if that's too abstruse a Danish-avant-garde-cinema reference.)