Alas, in this shot Emp’s head is disproportionately large in relation to the rest of her body, at least compared to the figure-construction proportions I normally use. I sometimes do this sort of thing for a bit of stylized, cartoony flair, but this time the effect was almost certainly unintentional.

Not much springs to mind about this page, so I might as well seize the opportunity to flog my Instagram account, which is linked on the Empowered webcomic template at upper right alongside my Twitter and tumblr: https://www.instagram.com/adam_warren_art/ Of late, as you’ll see, I’ve been doing a whole bunch of life drawing and/or figure studies from random photoreference, mainly in the hopes of improving my somewhat unimaginative and repetitive approach to shadow patterns on the human body. The experience has been an interesting but occasionally frustrating one, as I repeatedly find myself banging my head against the fairly severe limitations of my meager anatomical knowledge. “Wait, what the hell is that bump supposed to be? And since when do the deltoid heads separate like that? (etc.)” The few anatomy books I have on hand haven’t been terribly enlightening about certain puzzling muscle-group issues that I’ve been noticing, so I ordered several promising-looking new ones to possibly clear things up. (Or not.)

For a week now, I’ve been taking an hour or so in the morning to work up a pageful of figure-study sketches from photoref, an indulgence made possible by the fact that I’m not drawing full-time at the moment. Rather, I’m working on scripts for multiple projects right now—including the February 2017 miniseries Empowered and the Soldier of Love, about which I’ll blither at great(er) length shortly. When I go back to work writing and drawing Empowered vol. 11 full-time in a month or so, I probably won’t be able to countenance losing a precious hour out of my all-important morning shift to random sketching of this sort. (As the 1st shift is  by far the longest and most critical—and uninterrupted by pesky email or exercise—of my workday, I’m loath to lose such a big chunk of it when engaged in the maddeningly time-consuming enterprise of drawing Empowered pages.) In fact, might as well paste in one of the aforementioned figure studies below: 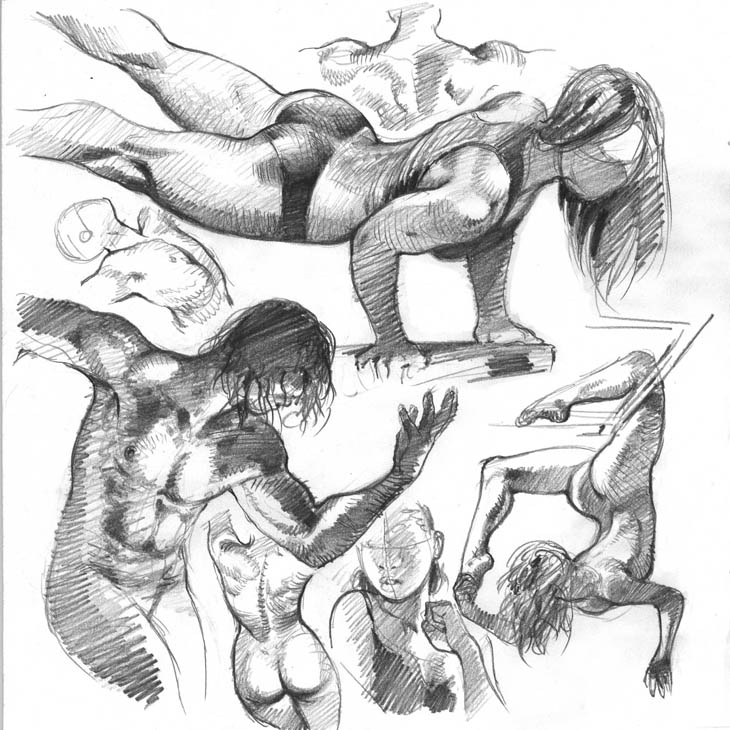 Interesting stuff, especially since I haven't done this much life drawing since I was still in school. I recommend it to all you artists out there; never too late to learn—or at least try to learn—something new.