This inclusion of this story in Empowered vol.3 was an ultimately disastrous attempt to meet a deadline. Originally, this slot in the book was to be filled by the bedroom cosplay roleplaying story “When Titans Fornicate,” which finally saw print in vol. 5—but was shown in an image on the back cover of vol. 3, as seen below. Whoops! 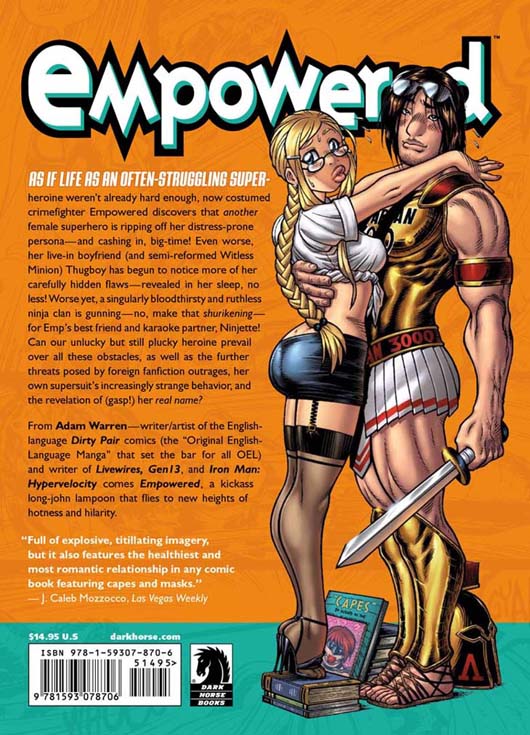 Ah, but I was falling behind on producing “Titans,” so I pulled the Hail Mary deadline stunt of taking another, incomplete Empowered episode, slapping a “metatextual” ending on it, and inserting the thrown-together result into the book. This was a short-term success in terms of keeping vol. 3’s release on time, but a long-term failure in terms of the overall volume, which would’ve been better served by including the story specifically referenced on the back cover of the g-d book, regardless of initial lateness. Oh, well.

Hilariously, this g-d story has come back to bite me in the ass one more time. See, I’ve been using the original scans of Empowered vol. 3’s artwork for this particular installment’s webcomic serialization, but I’ve just now discovered that I don’t have a scanned version of the heavily edited and pasted-up files that make up this hastily kludged-together story. I’ll either have to laboriously hand-assemble the edited version with my meager Photoshop skillz, or just grab the digital edition from Comxology, take screencaps of each finished page, and paste ’em in here. Wheeee!