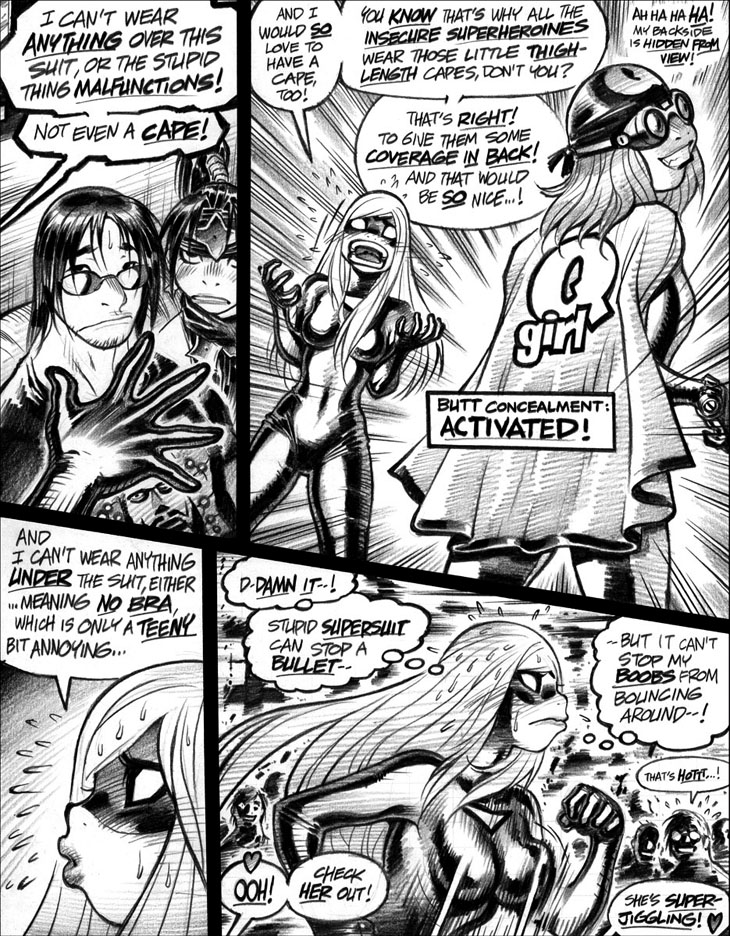 Panels 3 and 4 bring up a point about Emp’s supersuit circa Empowered vol. 1 that, upon further consideration, I later dropped entirely: the idea that the hypermembrane doesn’t prevent Emp’s unconstrained and braless chest from bobbing to and fro. This seemed an amusing riff when I drew this story because the suit, as you’ll see, is far more akin to a coating of body paint than any form of fabric, and thus would provide her, ah, “wobbly bits” no support whatsoever. This, however, was a concept soon discarded during the heavy-duty action scenes of later volumes, when our heroine would be wildly charging, leaping, punching and VORPPing, not to mention being “ragdolled" and curbstomped. In theory, during all this violent activity, Emp’s unrestrained chest should’ve been bouncing and bobbing and, well, “figure-8”-ing like crazy, but I found this supposed touch of—ahem—“realism” to be unnecessarily distracting.

(I’m not kidding about the “distracting” bit, either. Years ago, I experimented with an Empowered fight scene using a more—ahem—“realistic” approach to Emp’s chest movement, and had to abandon the sequence after only a few pages, so goofy and obnoxious were the results. Any attempt at a compelling action narrative was, I found, soon wholly derailed by the eyecatching and attention-grabbing imagery of BOUNCY, BOUNCY, BOUNCY.)

Ah, but now we venture into the territory of whimsical “No-Prize” non-explanations as to why Emp’s supersuit now does provide her support, as opposed to panel 4’s problematic depiction. My theory is that the suit’s hypermembrane eventually perceived its wearer’s extreme discomfort with the “BOUNCY, BOUNCY” tendency, and took unearthly measures to suppress that tendency. Given its ability to protect Emp—at least temporarily—from horrific impacts and the like, her supersuit can apparently manipulate inertia and/or kinetic energy; so, the membrane wouldn’t have to expend much in the way of superpowers to dampen any excess movement of her chest.

The fun part? I’ve never shown that Emp has actually noticed this motion-inhibiting effect. I like the idea that, in a future Empowered volume, she might finally blurt out, “Hey, didn’t my boobs used to bounce around a whole lot in this suit? When did that stop?”

Good question, Emp! (No idea, to be honest.)