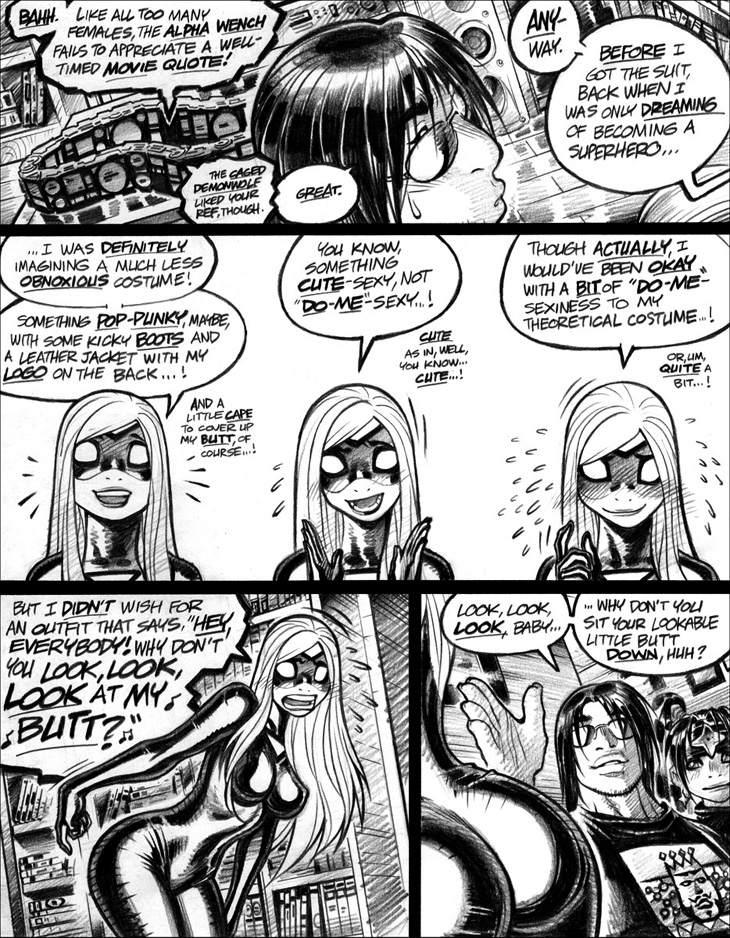 In panel 2, I'm disappointed that 2005-Era Me missed out on the opportunity to actually depict Emp's childhood vision of a superhero costume.  For the record, I've long contemplated an Empowered "alternate universe" spinoff of sorts, in which a nine-year-old version of Emp—at the very height of her lifetime confidence level—finds the supersuit, and a very different timeline ensues. This younger incarnation of Emp would sport the hypermembrane in a form akin to what Grown-Up Emp describes here.  Alas, I've never been able to interest my (print) publisher in this admittedly peculiar spinoff concept—which I dubbed Empowered Girl—because of fears that an all-ages Empowered book would lead to confusion with the very much adult main title.  Oh, well.

Panel 4: Goofily enough, the tune behind Emp's sing-song "look, look, look at my butt" is inextricably lodged in my head, to the point that, every time I look at this panel, I hear that ridiculous snatch of music.

Panel 5: As, I've said before, I'm not terribly fond of this era's "baggy T-shirt" Thugboy, which missed out on the easy opportunity to broaden the series' appeal a tad with shirtless beefcake.  (Not to mention that, despite being a lifetime baggy T-shirt wearer, I have remarkably little skill in actually depicting such clothing.) On the other hand, at least Thugboy's shirts from this period feature reasonably amusing designs at times, such as the Katamari Damacy King of the Cosmos image seen here.