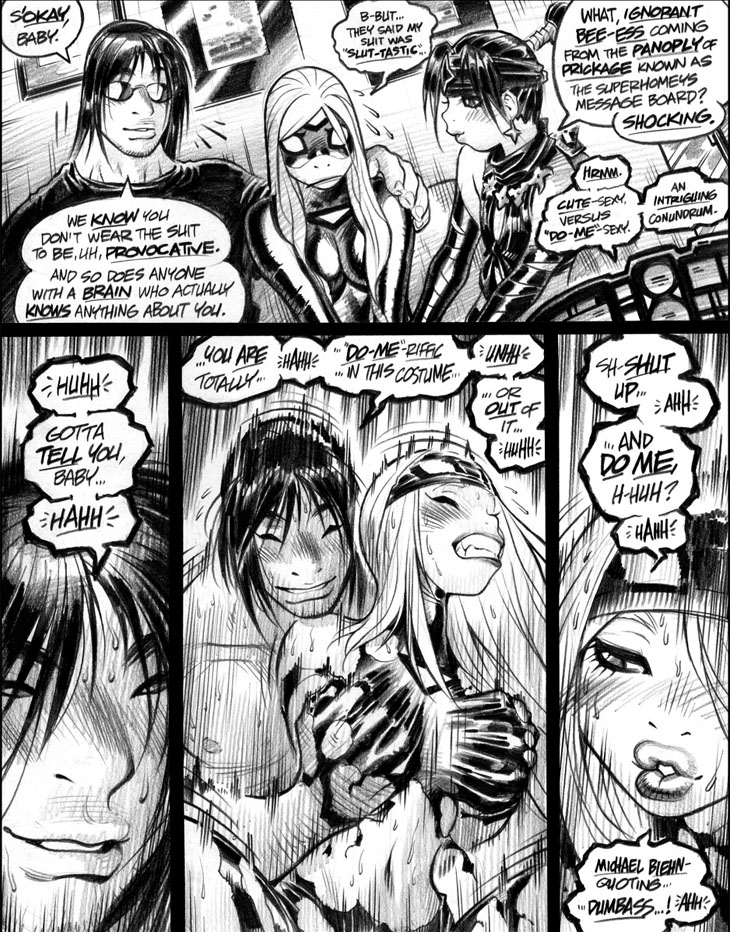 Panel 1’s mention of message boards was a then-current technological reference that will, I suspect, continue to not age very gracefully as the years roll on. Then again, a reference to the nascent social media of the 2006 era might well have aged even less gracefully—MySpace, anyone? (Yikes.)

Must say, the mention of a SuperHomeys message board intrigues me a fair bit. What would the team be using as a social-media platform in the present day, I wonder—besides the usual app suspects of the real world, that is. Might they employ a social-media strategy based on Empverse übertechnology, perhaps? Methinks that might well indeed be the case! (Cue Yrs Trly rubbing my bearded chin as I gaze thoughtfully off into the distance.)

Panel 3 brings up a point that I cannae quite recall if I’ve addressed in the previous 140-odd commentaries. Namely: Why, you might ask, is Emp more often than not wearing her tattered supersuit during her sex scenes with Thugboy? Later, in Empowered vol. 2, I belatedly worked up an actual, in-universe rationale for why this would be the case—but back in these early days, I had another, rather more practical reason for Emp’s supersuited “sexy time.”  See, the rendering scheme I use for this series’ pencil artwork requires a constant dose of high-contrast values. (That’s why almost every superhero costume in the Empverse has an area of solid black on it.) Drawing Emp and Thugboy wholly nude, alas, provides no such value range, instead making for a wan “coloring book” appearance—though the “coloring,” in this case, would be only some anemic gray-tone shading provided by an HB-lead pencil.

Ah, but drawing Emp wearing the tatters of her supersuit during her bedroom sessions with Thugboy helpfully provided the stark values that my rendering style requires—and, in panel 3 here, also provided a little cover for Emp’s chest. (Though, come to think of it, Thugboy’s cupping hands might have covered her up just as well, whilst homaging an old Janet Jackson photo that readers Of A Certain Age might recall.) Remember, riiiight up until the publication of Empowered vol. 1, my editor and I were convinced that the series’ scrupulous avoidance of actual nudity would allow the book to be released without shrinkwrapping; alas, my publisher’s legal department decided otherwise at the last moment, and every volume of the series has since shipped with a MATURE READERS label and a “Sanitized For Your Protection” wrapping of plastic. Oh, well.