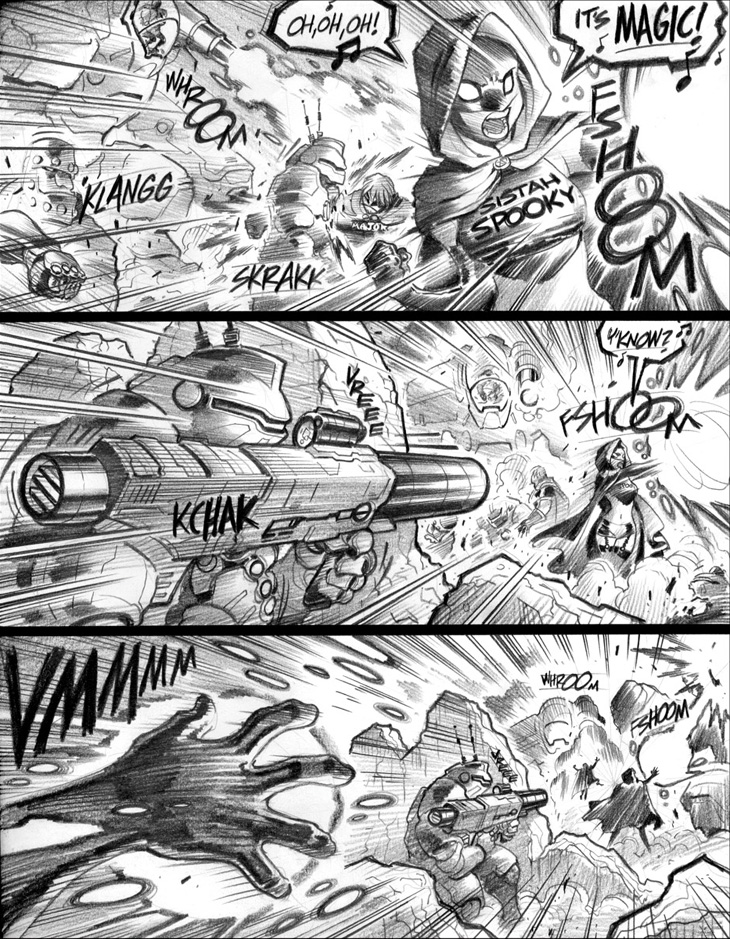 This page features a storytelling technique that I adore in the abstract, yet detest when actually drawing: the so-called “progressive zoom-out,” in which the camera pulls back over the course of multiple panels. Depicting such a “zoom-out” often proves maddeningly annoying and tedious, yet I instantly forget about all the annoyance and tedium once I’m finished drawing the damn thing. Gotta say, I’m all too often blithely sanguine and cheerfully casual about drawing-related difficulties when I’m not, you know, actually drawing. When I’m operating in the airy abstraction of purely writing mode, I’ll often take on art-related tasks that seem No Big Deal at the time—which then, as if by magic, transform into Very Big Deals Indeed once I’m faced by the comparatively grinding and mundane task of putting pencil to paper.

As for the sound effects on this page—or “sound FX,” in comics-pro parlance—all I can say is, hope you like this particular set of FX, as you’ll be seeing KLANGG, VREEEE, KCHAK, VMMMM and FSHOOM (and their friends) many, many times over the thousands of Empowered pages to come. For reasons I cannot quite spell out, only a very limited range of sound FX “sound right” to me—or “read right,” I suppose. I’d love to go hog-wild with a wider variety of onomatopoeia—such as, say, the hilarious blizzard of sound FX Alan Moore used for rapid plant growth in Swamp Thing, back in the 80s day—but some peculiar and ineffable algorithm in my subconsciousness makes such random FX “sound wrong” when I try to write 'em.

And yes, in panel 1, Sistah Spooky is indeed making a reference to the lyrics of the 1974 classic “Magic,” a deathless tune by the Scottish pop-rock band Pilot. (And I absolutely did not just look that up on Wikipedia.)