Panel 1: Chloroform ahoy! Or could this be the humdrum alternative chemical halothane—as referenced in Empowered vol.1—which so aggravated the choloroform-enthusiast community?

Panel 2: Braided hair can often be surprisingly difficult to draw, which is why I had to use an rather unusual piece of reference for this shot: that is, an actual piece of yarn woven into a braid. (Artists very rarely use direct physical reference like this, due to the tragic lack of motorcycles, elephants, skyscrapers, jungles and the like in our studio spaces.) If I recall correctly, a helpful—and, literally, “crafty”—fan gave me the “reference yarn” when I was drawing sketches at a convention a decade or two ago, and was running into difficulties trying to visualize the appropriate intertwining pattern whilst drawing a character with such hair.

In fact, I also used the piece of “reference yarn” for a short story I did long ago for Udon’s Street Fighter comic, starring the notably braid-rocking character Cammy—a personal favorite SF character of mine, both to draw and to play, even if I was spotty at best at pulling off her “Cannon Spike” special move. Tragically, my drawing hand proved too fragile to cope with playing digit-mangling fighting videogames, so I had to bail on ’em decades ago. Might also be the case that my temperament was too fragile for such games as well, as the last time I messed around with a Street Fighter iteration, I found myself once again sputtering if not fulminating with rage at the CPU fighter’s maddening cheapness, as in my controller-smashing, poor-impulse-control days of videogaming youth. (“How could Guile have charged that Sonic Boom, you sonuvabitch? He was moving forward the whole time!”)

Alas, I lost the piece of reference yarn years ago, and must now “wing it” when drawing braids. Ah, but for your plait-drawing convenience, here’s artist Jesse Hamm’s simple but handy guide for drawing braids: 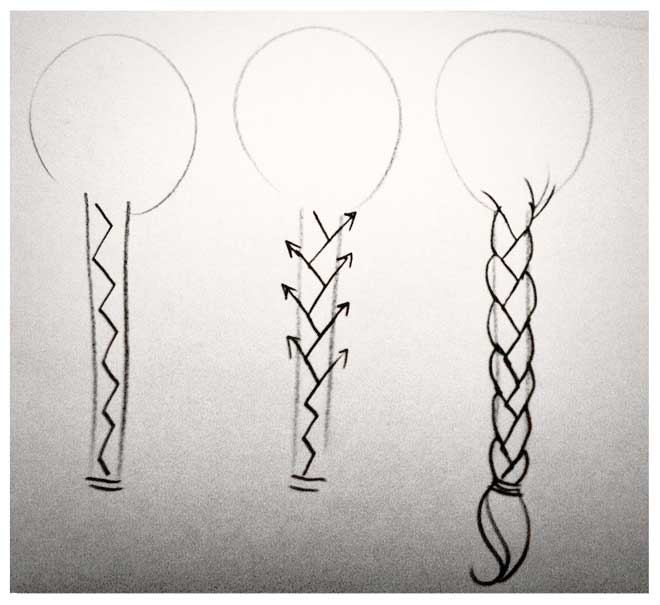 For the record, I strongly recommend that any and all artists out there follow Jesse's helpful and informative "Hamm Tips" Twitter account for comic art suggestions, if not consider supporting his Patreon along those lines.