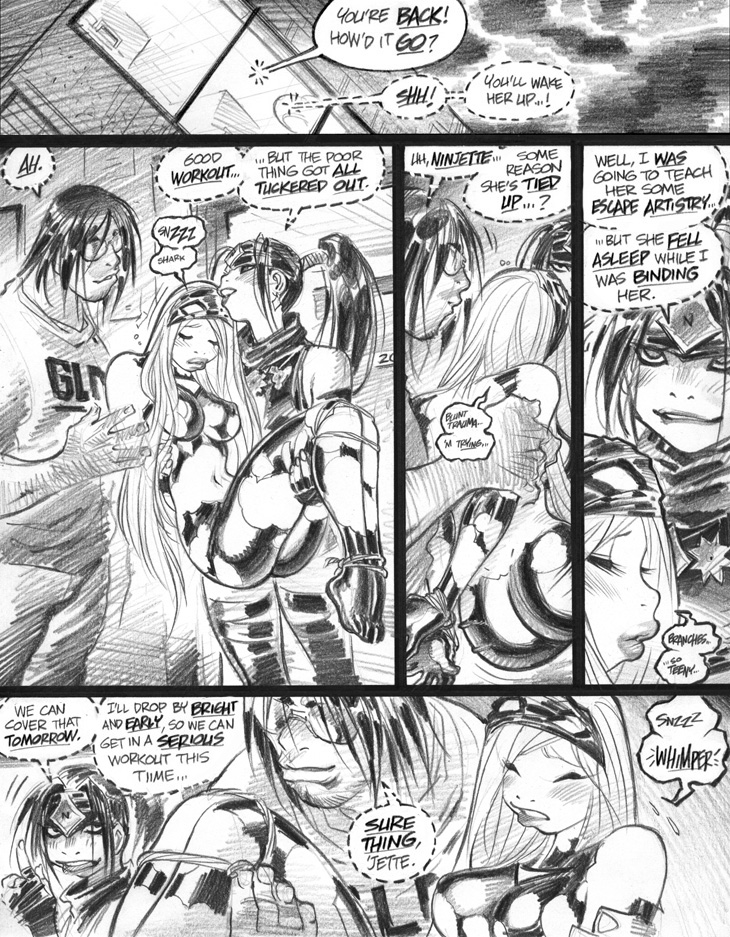 Panel 1: Why, look, it’s an honest-to-God exterior shot of Emp’s apartment building! Sad and detail-shy as this panel might be, it does count—more or less—as an establishing shot, in a volume almost entirely void of such shots. While choosing to draw early Empowered with overwhelmingly character-focused artwork made it far less tedious to draw than my older, more background-intensive comics, I must admit that this wholesale evasion of environmental work probably makes this series less satisfying for some of my long-time fans.

In fact, I know that to be the case, for a few such old-school readers. One online critic recently opined that my work’s gone downhill ever since the miniseries Dirty Pair: Sim Hell, which I drew five g-d years into a comics career now lurching towards the three-decade mark. Sim Hell really does sport seriously detailed background work, in part because it was drawn on positively gigantic old-style original pages that dwarf contemporary comic-art board, let alone the teeny, copy-paper originals of Empowered. (And even this hastily scrawled series would look impressively detailed if its artwork was drawn four or five times larger than print size.)

Then again, I’m a bit puzzled by one-time fans who apparently viewed the comics I wrote and drew as nothing but background-detail delivery systems. To me, drawing environments is only a small part of the job I do, with concerns about characterization and narrative and storytelling being vastly more important than noodly BG detail. Of all the comics work I’ve ever done, Empowered eventually comes the closest to achieving the total narrative experience that I’d ideally want my comics to deliver. (Note that I did say it eventually comes the closest, as the Empowered of future volumes is a rather different animal than these early short stories.)

That being said, a more detailed strain of environmental depiction does eventually make its way into Empowered—but not for another few hundred pages, I’m afraid.